Crocodile vs. Alligator: What’s the Difference?

What is the difference between a crocodile and an alligator? The short answer: one will see you later; the other will see you in a while…

These amazing animals share many similarities, but there are also some key differences between alligators and crocodiles.

Have you ever wondered: are crocodiles and alligators related? Which is bigger? And which is more dangerous?

In this article, we answer all the big questions about crocodiles vs alligators, and outline five of the key differences that set them apart. 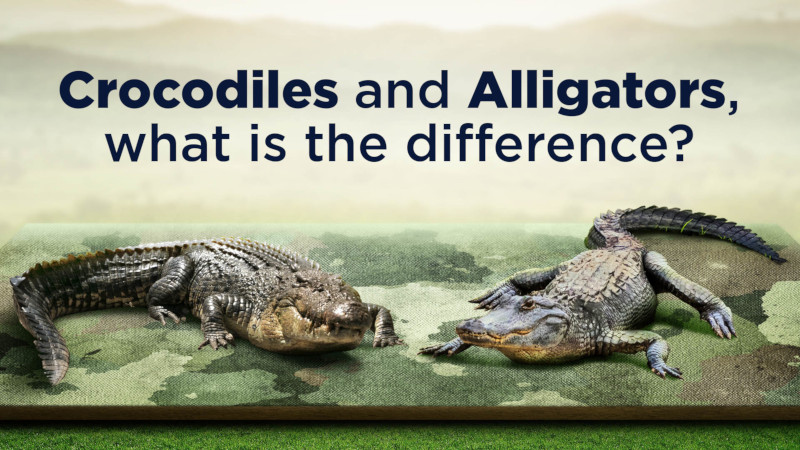 Crocodile vs. Alligator: What’s the Difference?

Tipping the scales: size matters
Which is bigger – alligator or crocodile? Well, that often depends on the age and sex of the individual, as the oldest males of both groups can grow to be pretty huge, while the babies are no bigger than a lizard and the juveniles are about the size of a house cat.

That being said, there is a slight alligator-crocodile difference when it comes to body size. Adult ‘gators grow to a maximum length of around 4.3 metres (14 feet), whereas their croc cousins can stretch up to 5.8 metres (a massive 19 feet!) from snout to tail.

Both are from the same reptilian order (Crocodylia), but are separate families; crocodiles are from the Crocodylidae family, while alligators come from the Alligatordae family. This essentially makes them evolutionary cousins – related, but with some key characteristics that set them apart.

One quick and easy way to tell the difference between alligator and crocodile species is in their physical appearance. Crocodiles tend to have v-shaped snouts that are long and pointed, whereas alligator snouts are typically shorter, bulkier and more u-shaped. Because their nose is often the only part that can be seen above the water line, this is a great way to know what kind of crocodilian lurks beneath. 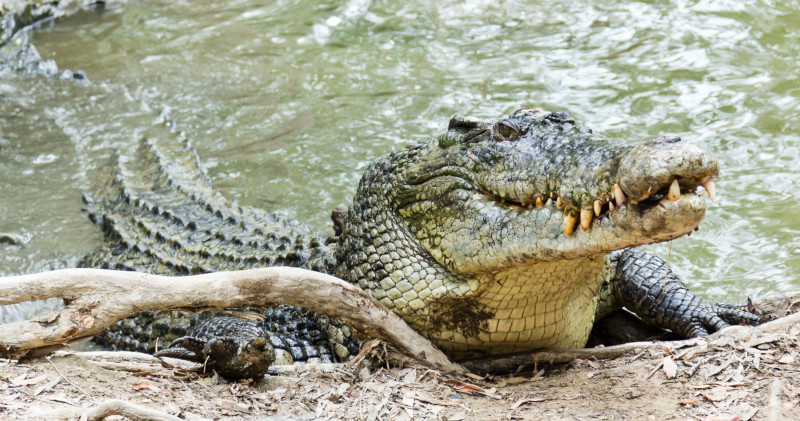 Colouration is another dead giveaway in the difference between alligators and crocodiles. If you happen to see one of these giant reptiles on dry land, you’ll notice alligators are normally dark green, grey or black, whereas crocodiles tend to wear various shades of green and brown.

Habitats and habits
A major clue to alligator and crocodile difference is the environments in which these animals live – depending on where you are in the world, and what kind of habitat you’re in, this will give you the answer to the question of which species you’re likely to run into.

Alligators are generally found in the warm, water-logged southern states of the USA and in some parts of China, where freshwater habitats provide them with food, shelter and nesting sites. Their love of freshwater and tropical weather makes them a surprisingly common sight on the golf courses of Florida, where they bring new meaning to the term ‘water hazard’! 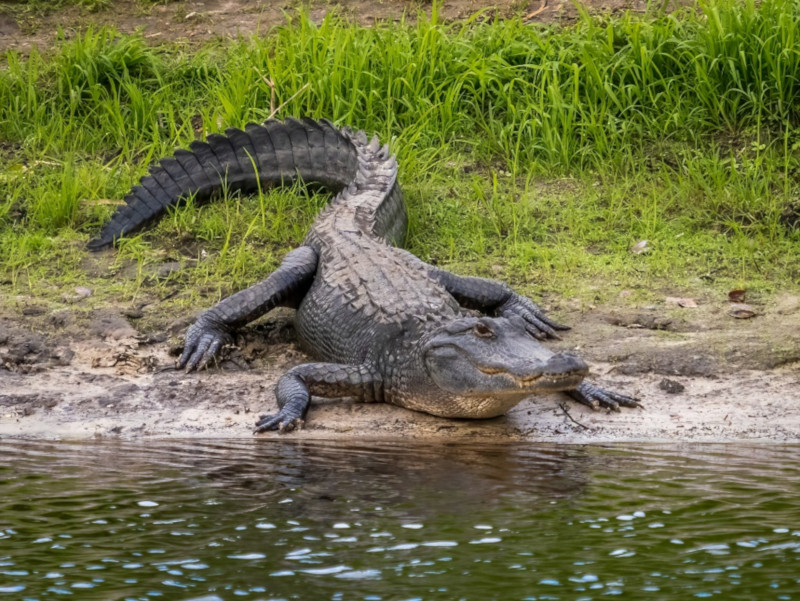 Crocodiles, on the other hand, generally prefer brackish water such as rivers, swamps and estuaries. Saltwater crocs are some of biggest in the world – from the Amazon, Nile and Zambezi rivers to the Great Barrier Reef, these monsters can be found on land and in coastal waters throughout Africa, Australia and some parts of the Americas.

Aggressiveness
Alligators are responsible for just 6% of all reported attacks on people by crocodilians. They only bite people when they are cornered and feel threatened, or if they are protecting their nests or young. More often than not, alligators will be more scared of you than you are of them.

Crocodiles, on the other hand, are an entirely different kettle of fish-eater. Especially in places where humans and crocs cohabit – such as the brackish swamps and billabongs of the Australian outback – big ‘salties’ have been known to snatch people that stray too close to the water’s edge. There are several hundred cases of crocodile attacks reported each year, some of which are fatal.

It all boils down to the question: which is more dangerous? Alligator or crocodile? Without a doubt, the croc wins this round. Even so, it’s a good idea to keep your distance from ‘gators too, just to be on the safe side.

Oh snap! Differences in teeth and jaw power
Crocodile and alligator difference can be seen in the shape and configuration of their teeth, along with the power of the jaw that snaps them shut. If you ever find yourself close enough to inspect the gnashers of these fantastic beasts – and we don’t recommend it – then they can tell you what kind of crocodilian grin you’re dealing with.

Crocodile teeth are made for ensnaring large animals like zebra, wildebeest, pigs and cattle. As a result, they’re sharp and pointed – like butchers’ knives. Alligators, on the other hand, tend to crush their prey (such as turtles and fish) with their conical, peg-like teeth.

So the difference between alligator and crocodile teeth is determined by their diet and eating habits – and this also has an effect on bite power. Crocs tend to bring down bigger, heavier animals, so their bite is stronger – an incredible 3,700 pounds per square inch (PSI) in some cases – whereas alligators’ bite strength tops out at about 2,500 PSI. This is still more than twenty times the power of a human jaw, which can only muster 120-160 PSI.

‘There be monsters’: on the trail of crocodilians in Riau, Indonesia
So, now can you tell the difference between alligator and crocodile? If you fancy yourself as a crocodilian investi-gator, one of the best places to study these amazing animals is in Restorasi Ekosistem Riau (RER); an area of protected forest and wetlands covering 150,693 hectares on the Kampar Peninsula and Padang Island off the coast of Riau in Sumatra, Indonesia.

This precious habitat is home to brackish swamps, saltwater inlets and undisturbed riverbanks – the perfect place for basking, hunting, nesting and rearing young. Bearing in mind everything you know now about alligator-crocodile body types, habits and habitats, which one do you think is likely to live here? 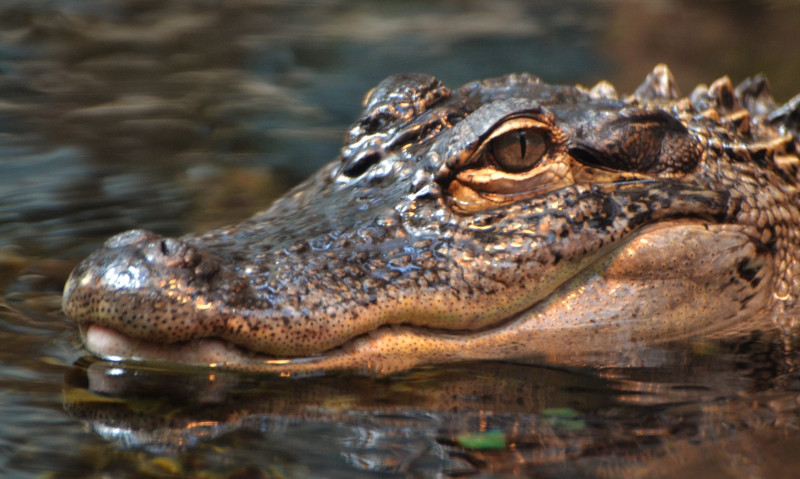 That’s right: it’s a croc. In fact, there are two species of crocodile found to be living in the RER area – the false gharial (Tomistoma schlegelii) and the saltwater crocodile (Crocodylus porosus). Let’s take a closer look at these two beautiful monsters, to see what sets them apart and makes them unique:

Native to Malaysia, Sumatra and Java
Lives in freshwater swamps and lakes
Dark reddish brown in colour
Long and thin snout, broader at the base
Can grow up to 16ft (5m) in length
Weighs up to 460lbs (210kg)
Fewer than 10,000 adults left in the wild
Threatened by habitat loss, hunting, fires and agriculture
Listed as Vulnerable (VU) by IUCN

The world’s largest crocodile species
Found throughout India, Southeast Asia and Australia
Lives in both freshwater and saltwater
Can grow up to 20ft (6m) in length
Weigh up to 2,900lbs (1,300kg)
Live for more than 70 years
Greatest bite pressure of any animal
Considered dangerous to humans
Listed as Least Concern (LC) by IUCN

The false gharial and saltwater crocodile are just two of the 101 reptile and amphibian species recorded in the RER. The false gharial (known locally as the sepit crocodile) is also one of 55 globally threatened species identified so far in the RER. Learn more about the unique ecosystem of the area and the efforts being made to preserve its biodiversity by reading our field stories. In the meantime, see you later alligator (in a while, crocodile)!