Also known as the Indo-Australian Crocodile, Saltwater Crocodile, and Man-eater crocodile, this crocodile species is the largest in the world, as well as the most feared by humans.

The Saltwater Crocodile is one of 101 reptile and amphibian species recorded living in the Restorasi Ekosistem Riau (RER) area, particularly in the Kampar and Serkap Rivers.

Generally, Saltwater Crocodile reaches 4.5 to 5.5 meters in length. However, there are cases where they grow beyond 6 meters.

Meanwhile, its body weight can reach more than 1 ton. Not surprisingly, this species is known to be bigger than the Nile Crocodile (Crocodylus niloticus) and the American Alligator (Alligator mississipiensis).

Saltwater Crocodiles have 17 to 19 teeth. Generally, the fourth, eighth and ninth teeth will be much larger than the others. Meanwhile, the first four are separated from the teeth located at the back.

They do not have scales on the back of their heads. The skin is dark green gray with a few black or dark brown patches.
There is also a yellowish color in the dorsal or back area and a white or yellowish color on the underside of the body. Its tail is covered in black spots to form a complete mottled pattern.

The scales on the back are short keeled and has about 16 to 17 scales per row. On the back, there are usually 6 to 8 rows of scales. 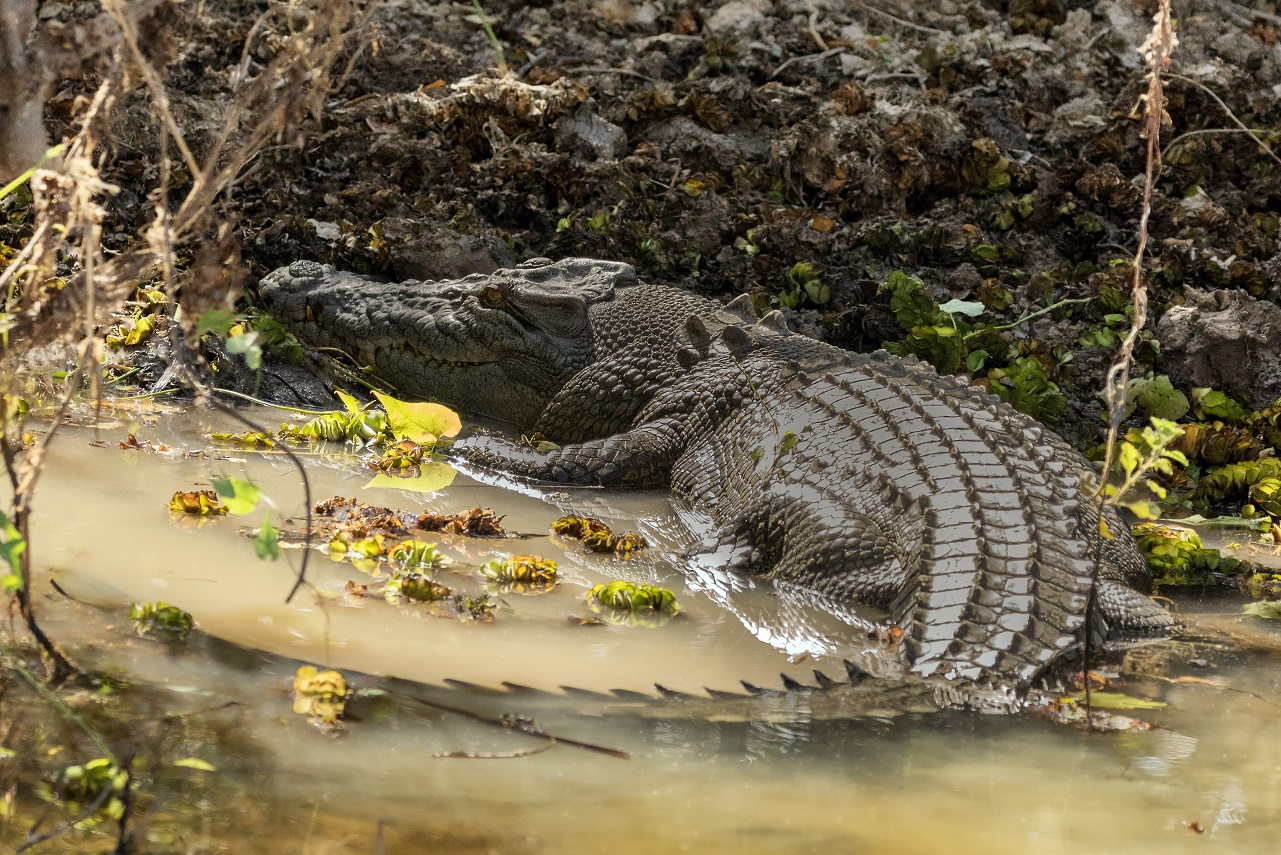 SALTWATER CROCODILE REACHES 4.5 TO 5.5 METERS IN LENGTH. HOWEVER, THERE ARE CASES WHERE THEY GROW BEYOND 6 METERS.

Saltwater Crocodile has a broad snout with nostrils and eyes located on the upper side of its head. This is what makes it able to immerse almost its entire body in water without disturbing his breathing or vision. The trick of immersing his body in water is also its camouflage method when hunting for prey.

Being at the top of the food chain, Saltwater Crocodiles eat various types of mammals, fish, frogs, bats, and there are even cases of these crocodiles attacking and preying on humans.

Even though it can be very vicious, at times, Saltwater Crocodile can also observe patterns, habits and movement of its prey.

Although the mating procession takes place underwater, female crocodiles will build nests to keep its eggs in mounds of soil or sand mixed with piles of leaves.

Female Saltwater Crocodile is able to produce about 40 to 70 eggs in one laying. These eggs will usually hatch within 70 to 80 days.

When hatched, the young crocodile is about 20 to 30 cm. They need help from their mother to get out of the nest for the first time. The mother will carry its hatchlings in her mouth when swimming in the water.

As the name implies, Saltwater Crocodile lives in estuary areas surrounded by vegetation because he often makes nests from plant stems.

In Indonesia, Saltwater Crocodile population is widely spread from Sumatra to Papua.

Although the population is still relatively large, the Saltwater Crocodile is protected by Indonesian law through Government Regulation No. 5/1990 and Minister of Environment and Forestry of the Republic of Indonesia Regulation P.106/MENLHK/SETJEN/KUM.1/12/2018 concerning Protected Plant and Animal Species.

Although there are reports of attacks by the crocodiles to humans in several areas in Indonesia, Saltwater Crocodiles actually live side by side with the people living around the Serkap River. 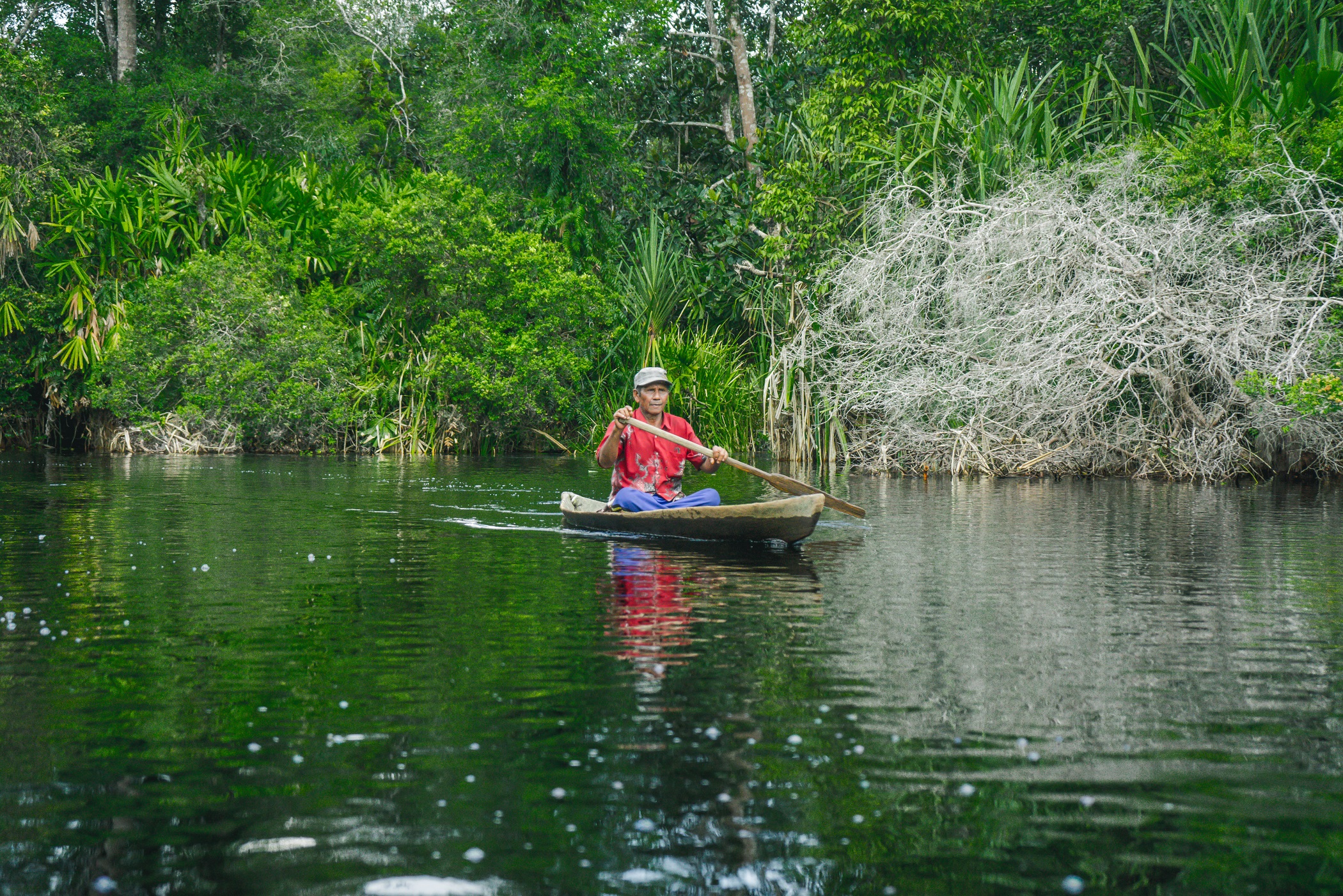 SALTWATER CROCODILES LIVE SIDE BY SIDE WITH THE PEOPLE LIVING AROUND THE SERKAP RIVER.

These fishermen rely its livelihood from the ecosystem around the Serkap River, and they have long consider the Saltwater Crocodiles as “friends.”

These fishermen live periodically on the banks of the Serkap River by building small huts. Currently, there is a community of more than 20 fishermen who live and settle in the River who called themselves “Serkap Jaya Lestari.“

To meet their daily needs, they catch fish using traps called pengilar, apart from being sold as raw fish, part of their catch is processed into “smoked fish (salai) which is a typical food commodity for the community.

Even though they live and work around the Serkap River where the Saltwater Crocodile lives, the conflict between the predator and the fishing community is limited to damaged fish trap since the crocodiles seldom try to take the fish inside the trap.

Therefore, in addition to preserving the forest by carrying out sustainable fishing practices, as recommended by the RER team, these fishermen always try to live in harmony with nature.

Some of the things that they believe should be avoided are the use of inappropriate words and act arrogantly. By always heeding these “taboos,” they believe that humans can coexist with the crocodiles without any serious incidents .