A Day in the Life of an RER Ranger

Ever wondered how we protect a landscape twice the size of Singapore while navigating one of the most impenetrable terrains in the world? Meet Hendrizal and team, our resident rangers who spend their time patrolling the RER forest in Kampar Peninsula.

Hendrizal is one of RER’s 60 rangers and, like most of our employees, he comes from surrounding communities. He grew up around the forest and decided to dedicate his working life to preserving it, joining RER in 2017 to help protect the incredible biodiversity it contains.

A typical day starts at the Serkap Ranger Post, around 10km from nearby settlements. Our rangers call this place home because it provides much needed sanctuary from the harsh conditions of the forest.

Today, Hendrizal along with his two ranger-mates will begin a five-day patrol in the forest. They carefully check their equipment because previous reports from the forest area they are going to patrol indicate it’s heavily waterlogged – up to 70cm in places – which will make this journey quite arduous.

They start their patrol at exactly 8 am. Using a small boat called a ketinting, they meander up the Serkap River for an hour before stopping at the riverbank to begin their ground patrol. Rivers are the most important means of transport in the RER landscape because it saves both time and energy. There are three main rivers in RER on the Kampar Peninsula, Turip, Serkap and Sangar Rivers. All of them are equally important for the protection and restoration of the landscape and its biodiversity.

Having disembarked the ketinting, they are greeted by the familiar spongy soft peat that they will call home for the next five days. They began the next leg of their patrol on foot.

The riverbank where they got off was not flooded yet, as with the next three kilometers or so. After just one hour of walking, they find Sunbear footprints as well as its droppings. The rangers quickly take out their notes, hand phones, and GPS. Hendrizal jots down the coordinates in his notebook, and one of his colleagues takes pictures of the footprints and the droppings.

Part of RER’s landscape management involves on the ground biodiversity surveys. Field teams, either rangers, ecologists, or forest protection, always take notes and report if they found any signs of animals or plants, especially those that are Endangered or above according to IUCN Red List.

The reports will be used by our ecology team to assess the landscape’s health or decide whether to put camera traps to better document the species. This the first time Sunbear marks have been recorded along this track. This will surely help our ecology team to better understand its distribution and foraging pattern. 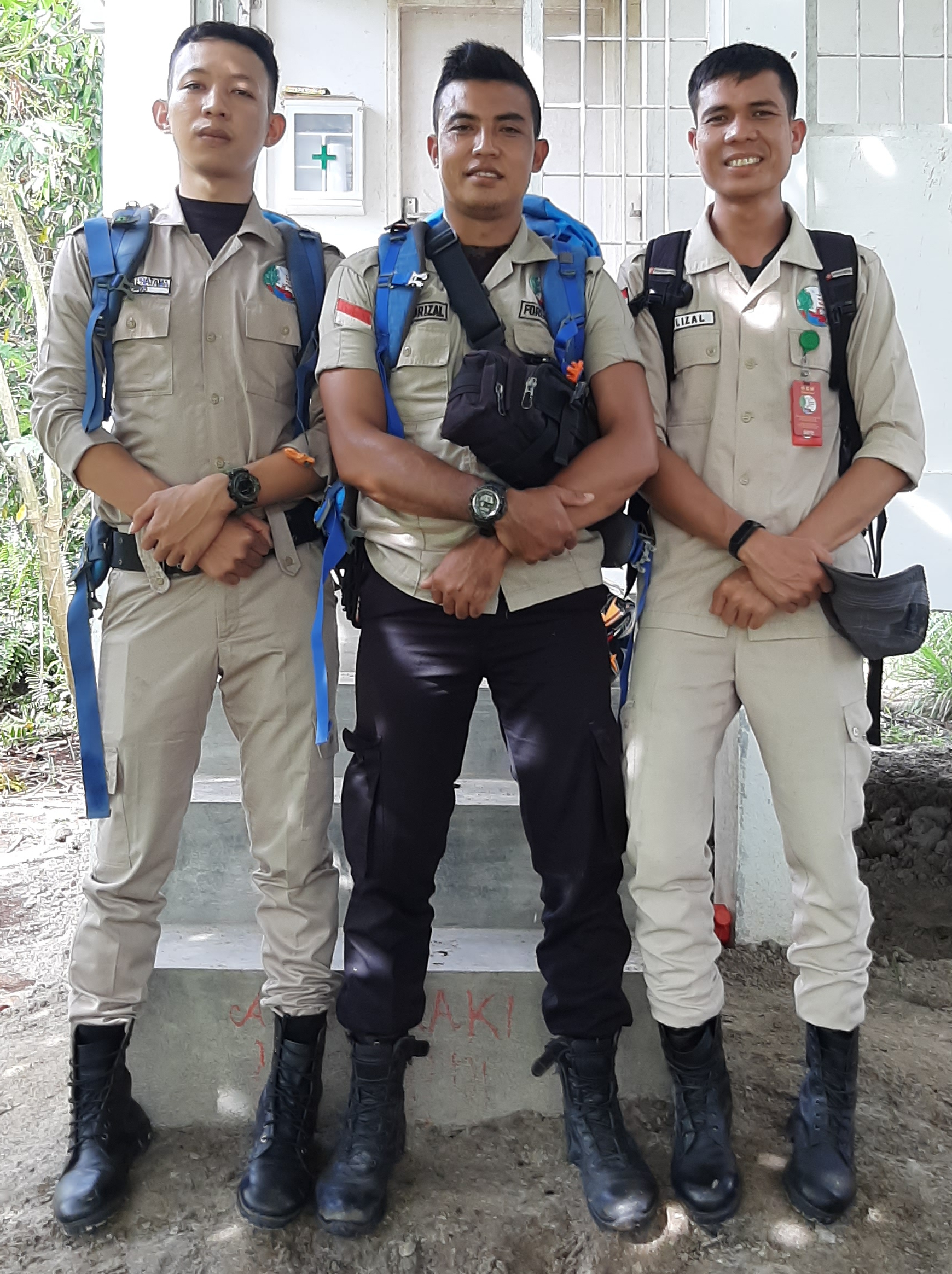 Hendrizal and his team preparing for patrol

After finishing recording the marks, Hendrizal and team continue their patrol while keeping a watchful eye on potential threats. Then, sooner than expected, the soil becomes flooded. So, they need to continue their patrol with soaking feet. By noon, they stop for lunch, a simple meal of fried rice and corned beef.

The cut their rest short because they need to reach the checkpoint before nightfall.

Back on their feet, they continue to be vigilant. At this time of year, there were criminals who set traps to catch forest dwellers such as tigers, Sunbears, or other valuable animals.

After two hours of walking they hear the thrumming sounds of hornbill wings. Quickly they look up and try to locate the sound source. When they finally see something interesting.

It’s a Rhinoceros Hornbill’s nest. It seems there were several chicks in it but, at around 30 metres off the ground, it’s too high to be sure.

They quickly take out their notes, GPS, phone camera, and binoculars to record the nest’s location and structure so that the RER ecology team will be able to assess this highly important finding.

After spending quite a long time in this spot, they continue their patrol. It’s still three more kilometers to the checkpoint. The flooded soil makes the progress slow and difficult, but they continue onwards.

By five o’clock in the afternoon, they finally reach the checkpoint. Soaked, tired and exhausted, they quickly set up their hammocks and fly sheets to camp there. While his team members are preparing the camp and dinner, Hendrizal takes out his satellite phone, and calls base to report today’s findings and to get tomorrow’s briefing.

It was a very arduous day, but the team is happy because they did not find any threats. It was just a typical day for RER rangers.

Ranger patrols and the continous efforts of RER teams are crucial to prevent any illegal activities towards the forest and its inhabitants.