The Equatorial Spitting Cobra, also known as Black Spitting Cobra or Sumatran Cobra (Naja sumatrana), is a highly venomous snake species which should be treated with caution. Although usually this snake prefers to avoid confrontation, some large adults will stand offensively, expand their hood and hiss loudly to strike, bite and spit venom if threatened. 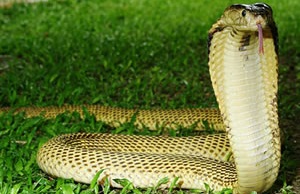 It’s part of the elapidaes family of venomous snakes characterized by their permanent erect fangs at the front of the mouth, which are found within Restorasi Ekosistem Riau (RER).

Celebrating World Snake Day on July 16th, let’s find out more about one of the most notorious snakes, Black Spitting Cobra, and learn about the importance of snakes for the ecosystem.

Habitat and characteristics
This snake is found in the equatorial Southeast Asian nations of Indonesia, Brunei, Malaysia, Singapore, the Philippines and Thailand. In Indonesia, the species is native to Sumatra and Kalimantan.

It can be found in elevations up to about 1,500m above sea level in mainly primary and secondary tropical forests. However, it is also reported to be seen in parks, gardens and in urban areas where it may come in contact with humans.

Sumatran Cobra is a terrestrial and mainly diurnal snake that feeds mainly on frogs and rodents, but may also take other snakes, small mammals and lizards as their prey.

In some areas in Sumatra, the Black Spitting Cobra is very useful in controlling rat populations in plantations.

Black Spitting Cobra is medium in length, between 0.9 to 1.2 meters. However, some of them can grow up to 1.5 meters.

The body is compressed dorsoventrally and sub-cylindrical posteriorly. Sumatran Cobra’s head is depressed, elliptical and slightly distinct from the neck with a short, rounded snout and large nostrils.

Eyes are medium in size with round pupils. Dorsal scales are smooth and strongly oblique. This species of cobra has no hood marks and the color varies based upon geographical location. The Equatorial Spitting Cobra is known with two color phases: a yellow form commonly found in Thailand, and a black form found in Peninsular Malaysia, Singapore, and the islands where it occurs in Indonesia and the Philippines.

Juveniles and adults also tend to be of different color.

Venom
The species gets name because it can projects venom when it feels threatened. The spit is strong enough to sometimes reach to more than three meters away.

When they do this, their main target is usually the opponent’s eyes, which will cause pain, confusion and eventually blindness. At the same time, this is also a defense mechanism, allowing them time to escape. But actually, (Naja sumatrana) does not really spit the venom, but instead propels it through the hole in their fangs.

Once the venom get inside the eyes, the opponent will experience (venom ophthalmia).

Snake venom can contain a series of proteins, varying among species, with different fractions responsible for different symptoms, for example, a neurotoxic, hematotoxic, or cardiotoxic fraction.

If a cobra bites you, you can die from heart and lung paralysis very quickly after the bite. But, while it’s easier said than done, staying calm and still after a snake bite can help slow down the spread of venom in your body. Not moving might save your life. 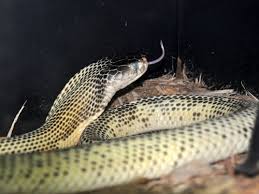 It’s a common myth that snake venom gets straight into your blood stream after a bite. In fact, it moves through your lymphatic system. Lymph is a fluid in your body that contains white blood cells which will only moves when you move your limbs.

These are some things you want to remember if you get bitten by a neurotoxic snake:
• Stay calm and still, breathe gently
• Apply a bandage firmly around the wound, as if for a muscle sprain
• Do not apply a tourniquet
• Go to the hospital immediately
And although it works in movies, sucking or cutting the bite area is a bad idea: never do it.

What to do if you encounter a Sumatran cobra
Sumatran cobra is not considered aggressive, but it’ll surely attack when threatened. It is important to remember that they are more scared of you than you are of them, so you should never attack a snake.

It is important that you do not pick up, poke or provoke any snake that you come across, either in a nature reserve or the one that sneaks into the residential area.

If the snake is only about a meter away, freeze at first and see the snake’s reaction: it will likely look for an escape route. If it is cornered, back away slowly because when you move slowly, it won’t see you as a threat and will less likely to strike.

If the cobra rears up and flattens its neck to form a hood, you need to act with caution because that means it is likely to strike.

10 Terrific Tiger Facts to Celebrate International Tiger Day July 28, 2021
Bringing Sumatran Tiger Corina back to Habitat March 26, 2021 The morning of 20th Dec 2020 was the culmination of concerted efforts led by the Ministry of Environment and Forestry to bring a female Sumatran Tiger named Corina back to…
World Conservation Strategy Day, Why Is It Important? March 5, 2021 Every year, the global community who cares for the environment commemorates March 6 as World Conservation Strategy Day.
Back to Field Stories