The morning of 20th Dec 2020 was the culmination of concerted efforts led by the Ministry of Environment and Forestry to bring a female Sumatran Tiger named Corina back to its habitat on the peatswamp forest of Kampar Peninsula. The article followed is a personal account of RER Ecologist, Prayitno Goenarto who was involved in the process.

My first experience being involved in a rehabilitated tiger release was an accelerated crash course in wildlife release. I had little prior knowledge of the project itself beyond a few fleeting whispers about a Sumatran Tiger that was found trapped and later rescued from the Kampar Peninsula in March 2020.

I had just completed a Masters Degree abroad and was due to return. Little would I know that the very tiger that would occupy a majority of my time would be aptly named Corina.

Becoming involved relatively late in the process, I had to quickly continue and complete the required procedures before her release. These included completing prey analysis of her release site, GPS collar testing, and eventual collar attachment, which would involve me getting up close and personal with her.

Upon my return to the workforce in August 2020, I met my new work colleague, who had been doing much of the work in preparing Corina’s release, including conducting community perception surveys, attending consultations with tiger expert forums and creating a general release plan.

Soon after the introduction, with her help I quickly learned how to use sophisticated statistics software, to continue and complete a follow up prey analysis study based on the camera trap data we planned to collect.

A week after my return I learned that she would be departing to pursue a PhD abroad, so I would need to really accelerate my understanding on this project and finish what was started.

Prior to release, a suitable site would first need to be identified. Given the vast heterogeneity of potential habitat types for the tiger on the Kampar Peninsula, the next step was to see if the site had enough tiger prey. This involved identifying and monitoring prey species in the Kampar Peninsula through direct and indirect evidence.

This was further corroborated based on pig track marks found along the Serkap River by a visiting researcher from Universitas Gadjah Mada (UGM) during field verification on 28-30 September 2020.

As the countdown to Corina’s release was ticking, I was given the opportunity to see the tiger first hand at her rehabilitation site in Pusat Rehabilitasi Harimau Sumatra Dharmasraya (PR-HSD), West Sumatra. The journey was an extended bumpy, twisting, cross-province drive from Pangkalan Kerinci, Riau all the way to Dharmasraya which required an overnight stay. 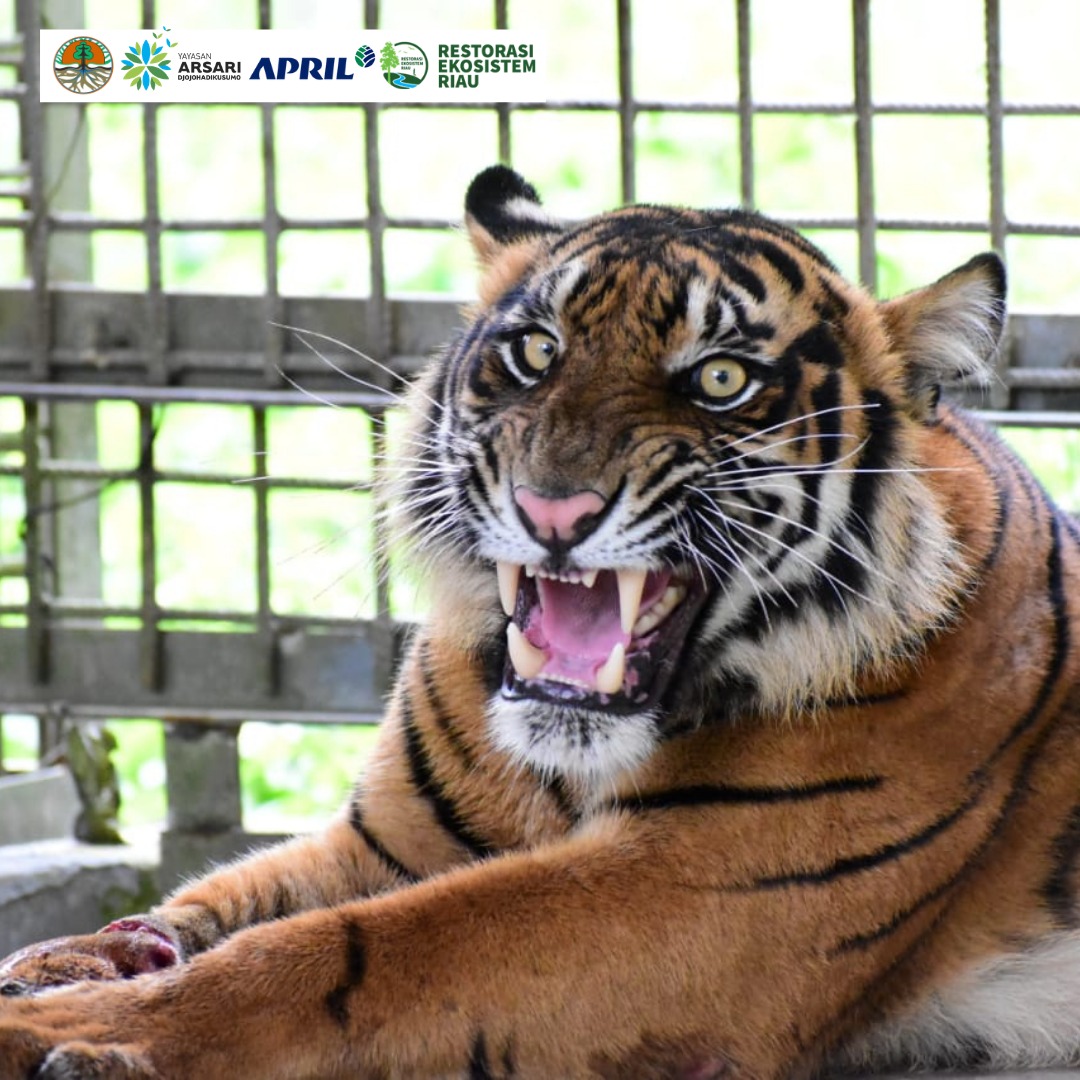 Upon arrival, we met with the center’s wildlife vets as well as Balai Besar Konservasi Sumber Daya Alam Riau – BBKSDA Riau (Riau Nature Conservation Agency) officers to discuss Corina’s recovery and current condition. After a couple of informal introductions over a simple meal, we were finally allowed to visit Corina.

All this site preparation, monitoring and equipment checking was all in anticipation of Corina’s release, and my excitement was palpable. We were led down a muddy path where we passed two temporary metal holding cages that housed two rather young Sumatran tigers before we reached an opening with two large outdoor enclosures on either side.

Across the enclosure was Corina who had maintained her wild instincts and generally avoided people. At one point she let out a bellowing roar, letting visitors know they were too close to her enclosure.

A quick inspection of her front paw revealed that the five months of rehabilitation and veterinary care from the PR-HSD team had done wonders to her snare-injured foot.

In addition to assessing the release site, we had to check if the GPS-collar we were planning to attach would function as intended.

The GPS collar would provide us with novel insights into the activity patterns and territory range of a released Sumatran Tiger. It consists of two main parts: the first component is the GPS transmitter and the second is a Very High Frequency (VHF) transmitter.

The GPS component is timed and automated, allowing for the animal’s location to be determined based on a set interval, while the VHF part allows for manual tracking of the animal using VHF telemetry receivers. The GPS collar shipment arrived in a hefty well-packaged box, having survived the lengthy journey from South Africa all the way to Riau, Sumatra.

Historically a majority of GPS-collared Sumatran Tiger releases have been in forests on mineral soil. Therefore, this release was particularly exciting and unique given that the release and monitoring will be in lowland peat swamp forest.

The peat swamp forest of Kampar Peninsula is filled with dense vegetation with high moisture level and a mosaic of different habitat types. That is why we needed to test the GPS collars’ signal reception to make sure it works as intended.

Testing the GPS collar was a bit tricky since we would have to time the collar’s GPS-coordinate transmission to match the scheduled 30-minute interval readings. We tested the GPS collars in the field across six different sampling sites on three major habitat types: open, plantation and natural forest.

Each test site had five sampling points 200 m apart along a straight transect, parallel to either a canal or road to enable easier georeferencing. GPS coordinates were also taken using a handheld device as a reference to compare coordinates given by the tracking software of the GPS collars.

Results were hopeful with a transmission success rate of over 80% for both collars.

Beside the GPS signal, we also tested the Very High Frequency (VHF) radio telemetry system along closed and open habitats, and recorded a maximum operating distance of around 500m and 800m respectively. This indicated that if we were required to locate Corina in the field, the system would give us more than half a kilometre to detect Corina’s presence.

After sharing our report to BBKSDA Riau, we began preparations for Corina’s transport to the habituation cage on the Kampar Peninsula.

Through tremendous concerted effort, Corina had been flown in via helicopter from Dharmasraya and moved into her habituation cage on the Kampar Peninsula in only a few hours. What was more remarkable was the fact that this was all completed without having to anesthetize her.

The cage gave Corina time to acclimatize with the peat swamp forest condition. This habituation cage would also allow her to adapt to the new smells, sounds, and feel of her surroundings after spending quite a while in the temperate climate of Dharmasraya.

The habituation cage was constructed into three compartments, with the tiger inside the second compartment and the task team in the first. A basic tarp was set up to block views between compartments, only a small flap opening allowed personnel to peer inside the cage.

Within a few days of getting used to her new cage, it was soon time to attach the GPS collar. I was given the responsibility to install the collar on Corina’s neck since I had been studying and testing it since it first arrived in Riau. 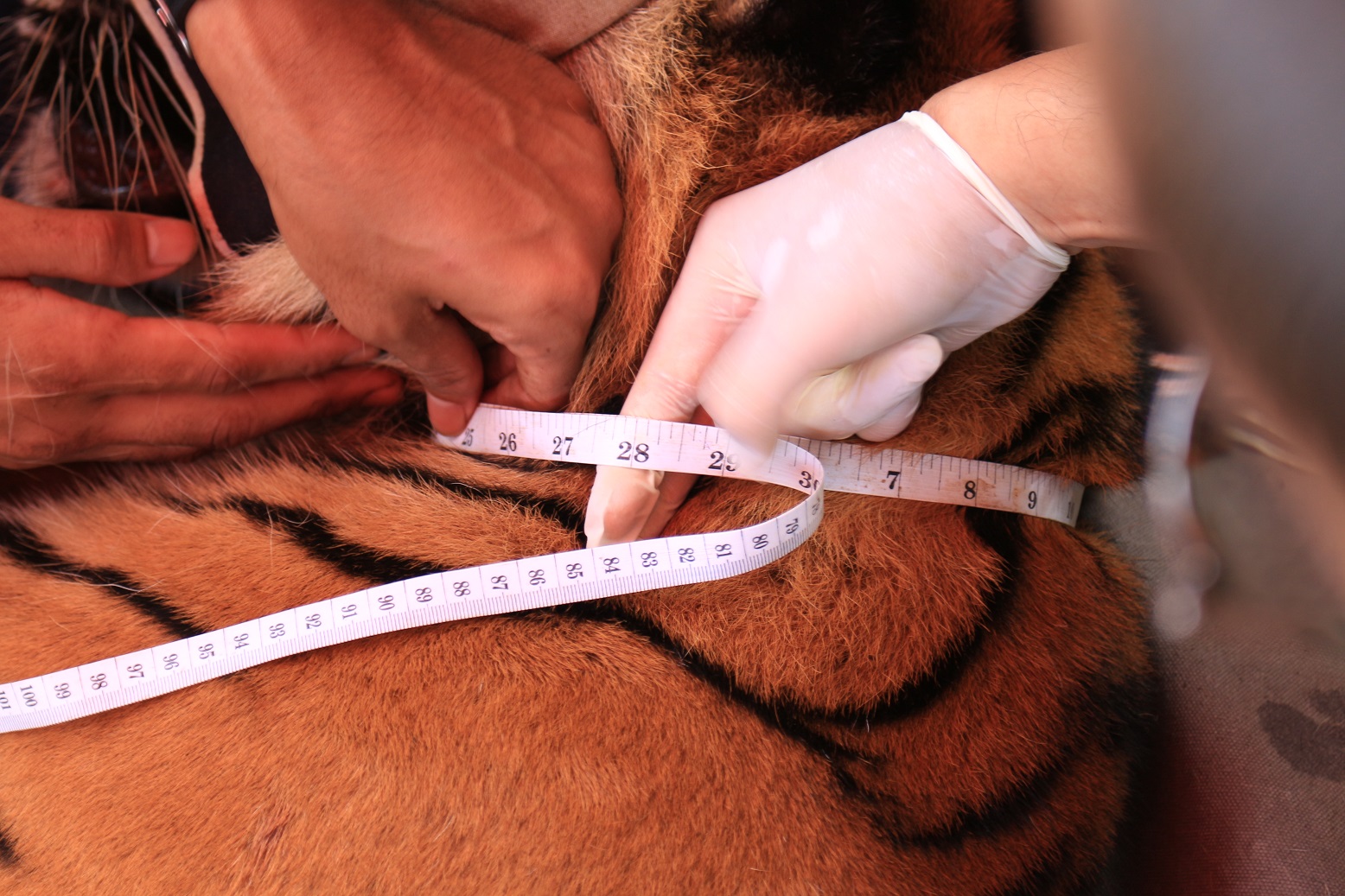 With GPS collar in hand, I waited anxiously a few meters away while the BBKSDA Riau team attempted to tranquilize Corina through the metal cage. Once she was sedated, we were given the go ahead by the joint vets team from PR-HSD and BBKSDA Riau to step into the second compartment of the cage, my heart was racing. I was extremely nervous, as this was my first time I was sharing a cage with a wild tiger.

Immediately upon stepping inside, we were greeted by a stench of decay as a ring of eviscerated chicken corpses lay strewn across the compartment. In the centre of this rancid landscape, Corina was lying peacefully on the floor. Her face was covered with a moist towel while a complex series of drugs kept her calm and sedated. Given the limited time, and the unnerving possibility of awakening a disgruntled 80+ kg tiger we rushed to re-measure her neck.

After cutting the GPS collar to the shortest marked length, we realized that the collar was still too loose for her neck and it risked falling off or being snagged and suffocating her. 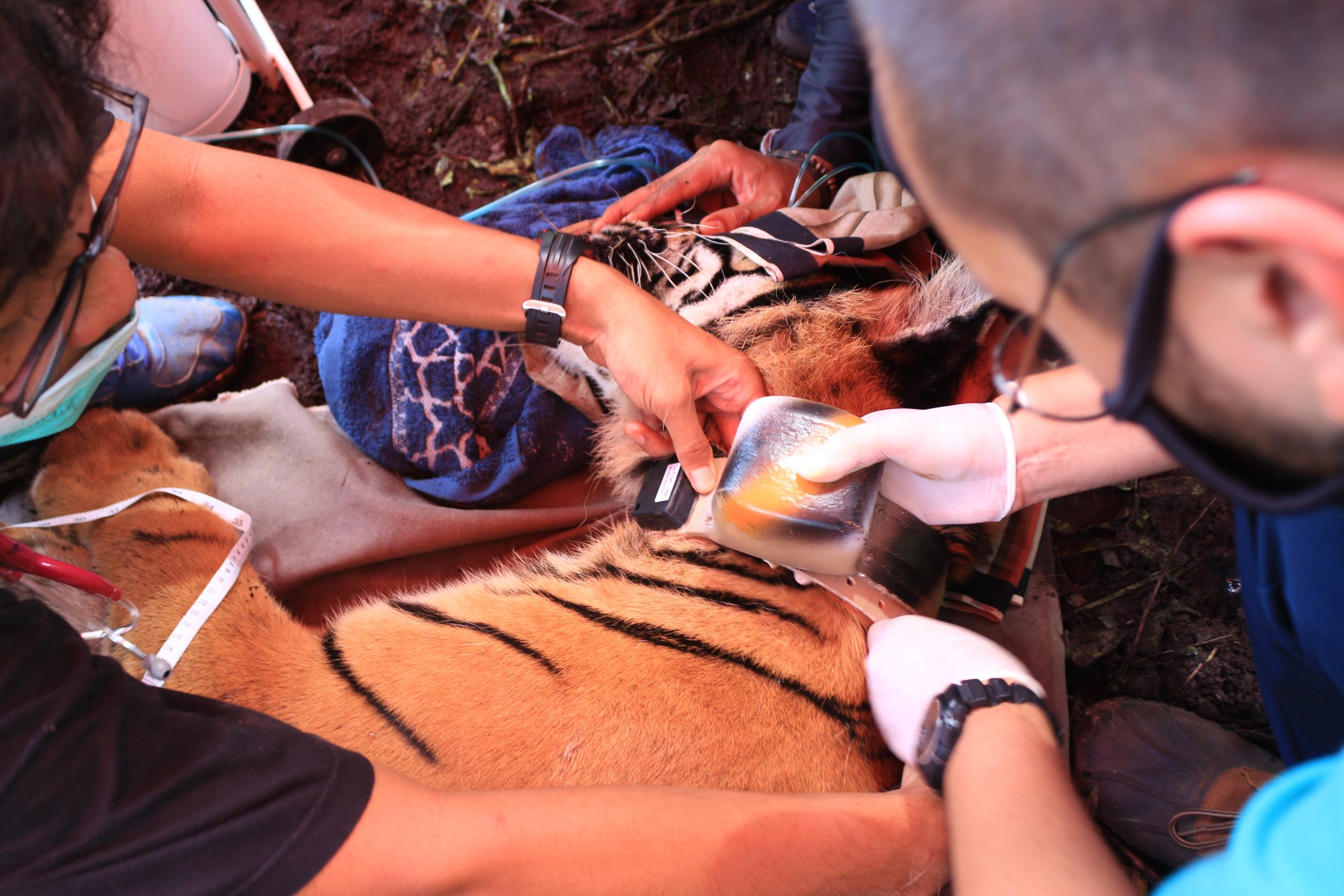 We had prepared a drill to anticipate this and created new holes to screw the collar in place. Luckily despite the loud drilling noise Corina did not wake up.

A few brief tugs and adjustments later, we agreed that the collar was safely secured, and I exited along with the non-veterinary team.

A huge sigh of relief followed as we embarked back to camp to start monitoring the GPS collar transmissions inside the cage.

Unfortunately, soon after collar attachment we realized while attempting to change the interval settings that once inside the metal cage, no coordinates were being transmitted. We were left with two possible outcomes: that the metal cage was interfering with the GPS collar from transmitting its coordinates or that the GPS collar had malfunctioned.

Re-anesthetizing Corina and swapping GPS collars with the back-up unit was out of the question, given the heavy health risk to Corina. Moreover, as the release day was less than three days away a delay was unlikely.

Therefore, after many brainstorming sessions that continued deep into the night, and a late night consultation with the veterinary staff and software engineer we decided to test our metal cage interference hypothesis by placing the spare GPS collar in the first compartment of the cage. After setting it overnight on a 30-minute interval, we realized that successful transmission rates were extremely poor.

Considering that the tiger GPS collar was still set on a six-hour interval, this meant a total of only four potential readings per day. We unanimously agreed that given the constraints and circumstances, the December 20 release was to continue as planned. We would have to hope that a reading would show up soon after her release.

The release itself was orchestrated using a rope and pulley system, where a metal gate would be pulled by a rope and Corina would be released. 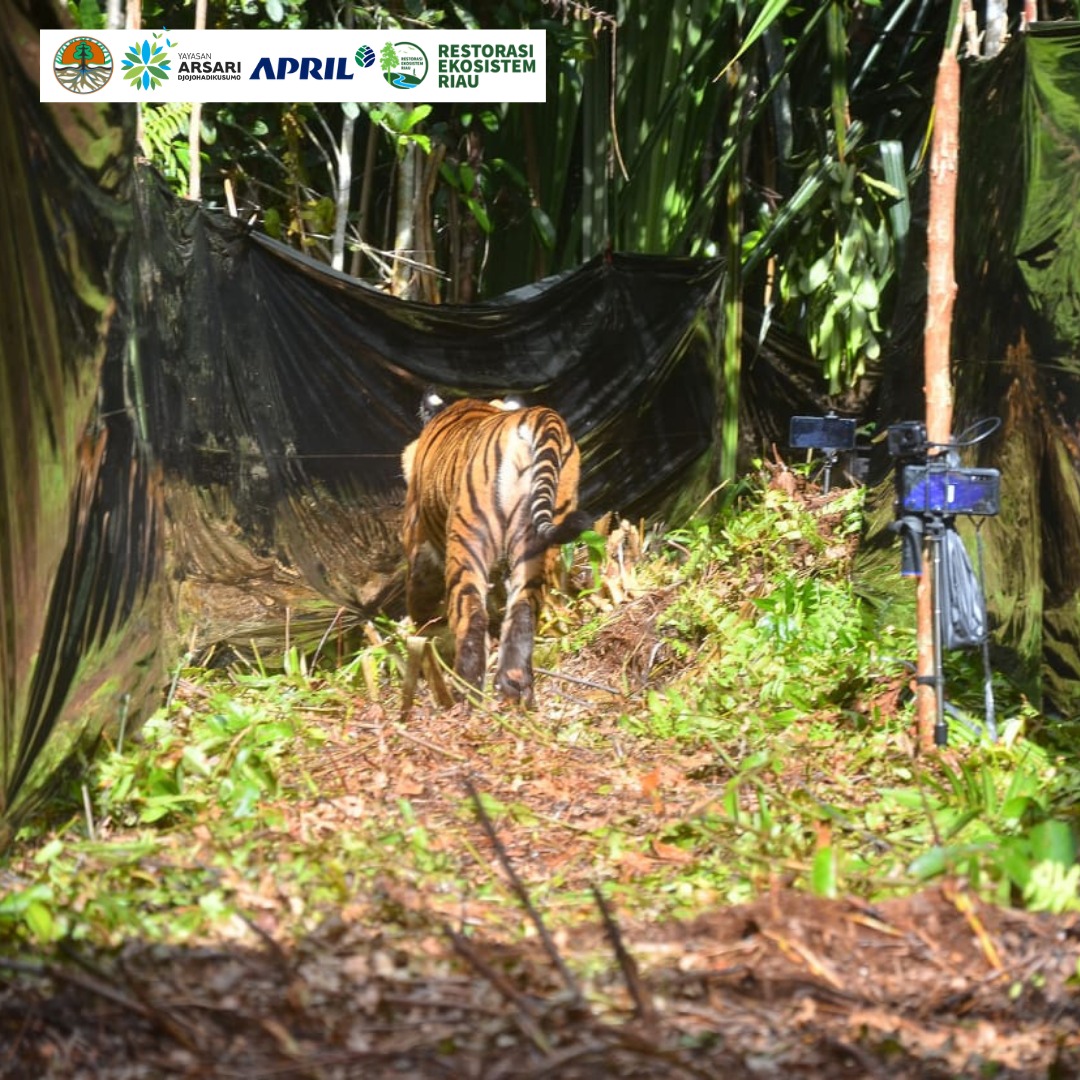 Sumatran Tiger Corina back to Habitat

Corina immediately bolted down the artificial path and in just a few seconds disappeared into the forest. The culmination of months of concerted efforts from the government and conservation organization supported by the private sector was gone in the blink of an eye. Corina is free.

A few days later after radio silence from the GPS-Collar a lone solitary point showed up on the software map. Our first successful coordinate reading.

Restorasi Ekosistem Riau (RER) would like to express its sincerest gratitude for the trust and cooperation extended by Ministry of Forestry and Environment of the Republic of Indonesia Riau Nature Conservation Agency (BBKSDA Riau), Arsari Djojohadikusumo Foundation andSumatran Tiger Rehabilitation Center Dharmasraya (PR-HSD) so that Corina can once again live wild and free in her home on the Kampar Peninsula, Riau.