Meet the Malaysian Giant Turtle (Orlitia borneensis), also known as the Bornean River Turtle or Malayan Giant Terrapin which belongs to the Geoemydidae family, the largest family of living turtles.

Found in Indonesia and Malaysia, the species is the largest freshwater turtle in Southeast Asia. It is a semi-aquatic species, inhabiting large lakes, swamps, and slow-flowing rivers.

The Malaysian Giant Turtle is one of the 107 species of amphibians and reptiles which have been identified in the Restorasi Ekosistem Riau (RER) area. 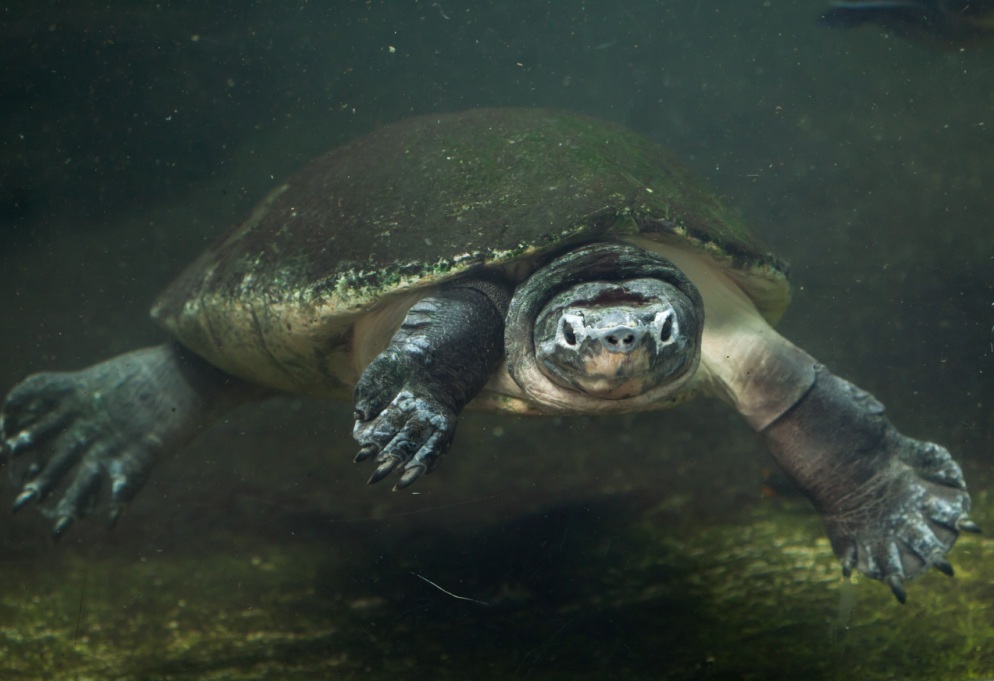 The Malaysian Giant Turtle can reach a weight of 50 kg. It has large webbed feet which resemble paddles, and long, thick claws.

Adult males are distinguishable from females with longer and thicker tails. Source: Shutterstock

The Malaysian Giant Turtle holds an Endangered (EN)  conservation status issued by the International Union for Conservation of Nature (IUCN), and is one out of the only four endangered reptiles identified in RER.

This turtle’s carapace (the convex, typically upper-facing part of the shell) is smooth, oval, and blackish or dark brown in colour, and can reach 80cm in length. Meanwhile, its plastron (nearly flat part of the shell, the belly part) is normally pale yellowish brown to off-white in colour.

The Malaysian Giant Turtle can reach a weight of 50 kg. It has large webbed feet which resemble paddles, and long, thick claws. Adult males are distinguishable from females with longer and thicker tails.

The Malaysian Giant Turtle spends most of its time in water, rarely leaving. It is mostly piscivorous, which means it depends on fish as its main food source. However, it may also take in fallen fruit or other available vertebrates.

The turtle also sometimes has to be released from fishermen’s hooks when it attempts to eat the bait on the hooks and gets trapped.

The meat of the giant reptile is highly sought after as food, and continued exploitation of the species is rapidly diminishing its population. In Riau, the Orang Asli (indigenous people) hunts the turtle for food, or sells it to Chinese middlemen.

Turtle vs Tortoise, Can You Tell the Differences? June 8, 2022 Did you know that these animals have scientific distinctions? The fact is, tortoises are turtles, but not all turtles are tortoises. Read more here to know the differences!
(Bahasa Indonesia) Kura-kura vs Penyu, Tahu Bedanya? June 8, 2022
Popular in East Kalimantan, Intermediate Egret Appears in RER’s AWC 2022 March 31, 2022 Ardea intermedia was the second most sighted bird species by the Restorasi Ekosistem Riau (RER) team during the Asian Waterbird Census (AWC) 2022.
Back to Media Centre