Meet the Malayan Civet (Viverra tangalunga), also known as the Oriental Civet and Malay Civet. This mammal is a viverrid which is native to Indonesia, where it is known as Tenggalung Malaya. It can also be found in Malaysia and the Philippines.

It is one of the 76 mammal species which have been identified in the Restorasi Ekosistem Riau (RER) area within the Kampar Peninsula. 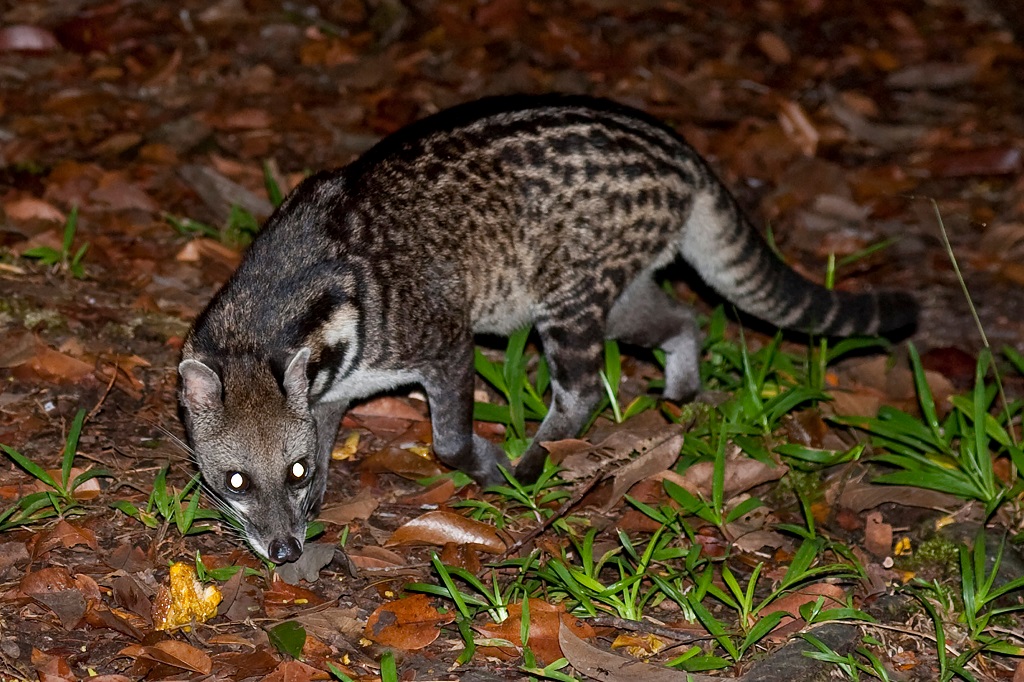 Although the Malayan Civet appears and behaves like a cat, it is not a feline. As a civet, it is actually more closely related to weasels and mongooses.

The Malayan Civet is considered one of the easiest civets to distinguish, with dark legs and a greyish coat with numerous black spots along its body. It also has a long tail which is black above, and ringed on the lower side. It is quite a small animal, weighing about 3.5 to 4.5 kg.

Although the Malayan Civet can be found in a diverse habitats, some researchers believed that most coastal areas, swamp forests and high-elevation areas were unsuitable for them. But we’ve spotted them in several occasions in our restoration area on the peat swamp forest of the Kampar Peninsula.

Like its distant cousin, the common palm civet, the Malayan Civet adapts very well on man-made landscapes such as plantations.  It thrives near human habitation, which is why it sometimes falls victim as roadkill. It is a solitary, terrestrial and ground-dwelling animal that typically forages on the forest floor.

Natural predators to this civet include large carnivorous mammals, such as leopards, tigers, crocodiles and large snakes.

It is a nocturnal species, preferring to hunt in darkness. As an omnivorous species, the Malayan Civet feeds on invertebrates and small vertebrates, including insects, frogs, rodents, lizards and small snakes. It also eats fruit, eggs and sometimes even roots.

The Malayan civets are solitary and omnivorous. They feed on invertebrates and small vertebrates.

The female Malayan Civet reproduces twice a year. It usually gives birth to four young per litter, following a two-month gestation period. The young civets – called pups – are born with their eyes closed and are cared for by the mother until they are about a month old, when they can typically fend for themselves.

The Malayan Civet can live up to 20 years old, although it is rare for most of them to achieve such an old age.

While the Malayan Civet is considered a Least Concern (LC) species by the International Union for Conservation of Nature (IUCN), meaning it is no danger of extinction, it is occasionally hunted by humans as it is considered a pest which commonly preys on poultry and raids fruit orchards.