Meet the King Cobra (Ophiophagus hannah), a snake which belongs to the Elapidae family.

This reptile prefers to live in dense lowlands, in the presence of lakes and streams. It is endemic to forests in the Indian subcontinent and Southeast Asia, in countries including Bangladesh, Cambodia, Indonesia, Malaysia, Nepal, Singapore and Vietnam, as well as in southern China.

The King Cobra is one of the 107 species of reptiles and amphibians which have been identified in the Restorasi Ekosistem Riau (RER) area. 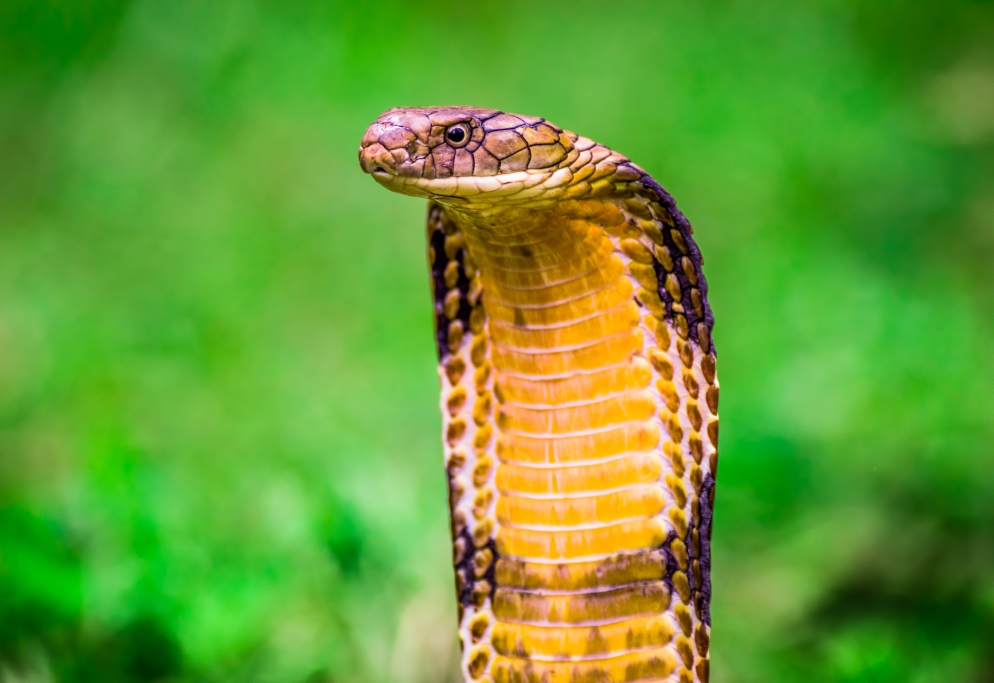 The King Cobra’s VU status is due primarily to an increasing loss of habitat as a result of forest destruction. It is also harvested for its meat, skin and use in traditional medicine.

It is a dimorphic species, with males reaching larger sizes than females – a feature which is unusual in snakes as females are usually larger than males.

Another difference between the King Cobra and other Asian cobras is the chevron (V-shape) stripe on the King Cobra’s neck, instead of the double or single eye shape seen in other cobras. A King Cobra can also be identified by its pair of large scales at the top of its head.

The King Cobra’s skin is dark olive or brown in colour, with black, white or yellow bands, and rows of smooth scales.  However, in the Kampar peat swamps, the King Cobra has a consistent brown to olive green color.

Like any other snake, it gauges a prey’s location by picking up scent particles with its forked tongue, transferring this chemical information to a sensory receptor located in the roof of its mouth.

This, coupled with its keen eyesight, intelligence and sensitivity to vibrations, allows the King Cobra to track and detect moving prey almost 100 metres away.

The King Cobra attacks by biting its prey, followed by envenomation – using its fangs to channel venom into its prey in a needle-like manner. Its Malay name of ‘ular upeh’, which means venomous snake, reflects this.

It can deliver multiple bites in a single attack, which results in severe pain, blurred vision, vertigo, drowsiness and paralysis, and eventual potential cardiovascular collapse, respiratory failure and death.

Fatality can be as early as 30 minutes after envenomation by a King Cobra. The cobra will then expand its jaws to swallow prey whole.

True to its Greek derived genus name “Ophiophagus”, meaning “snake-eating”, the King Cobra preys chiefly on other snakes – typically rat snakes, pythons and pit vipers – and sometimes on other vertebrates such as lizards, birds and rodents.

However, once it has had a large meal, the King Cobra is able to live for many months without needing another, because of its very slow metabolic rate.

The King Cobra generally prefers to avoid confrontation and will attempt to escape when annoyed. Still, it will become highly aggressive if provoked continually, issuing a hiss that sounds much more of a growl.

Female King Cobras are dedicated parents, and will guard their nests of eggs from predators determinedly. The venom of baby King Cobras is just as potent as that of adults.