Meet the Giant Softshell Turtle (Pelochelys cantorii), one of the largest freshwater turtles.

This species is widely spread in southwest Asia from India to southern China (including Hainan). Giant Softshell Turtle can also be found in several regions in southeast Asia, including Sumatra, Java and Kalimantan in Indonesia.

Main habitat for this species is usually around lakes, sea shores, or large river estuaries. That is why the Giant Softshell Turtle is one of the species identified in the Turtles of Kampar Peninsula publication compiled by Restorasi Ekosistem Riau (RER).

Giant Softshell Turtle is also one of 101 reptiles and amphibians identified in RER area. 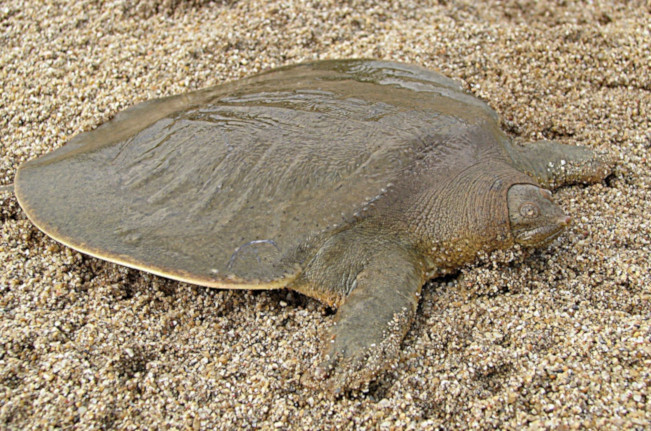 It has a soft, flat shell, and does not have scales commonly seen in turtles with hard shells.

The shell or carapace of Giant Softshell Turtle is greenish gray without any specific patterns found on the shells of other turtle species. The underside of the body is white, reddish, or yellowish in color.

The head is quite wide with a long neck and a proboscis-like nose.

Due to its odd facial features, this strange-looking turtle is also referred to as the ‘frog-faced softshell’.

The Giant Softshell Turtle has a longer lateral side than other turtles and is the largest species of soft-shelled turtles.

The Giant Softshell Turtle’s main prey are aquatic organisms such as fish, crustaceans, mollusks and some aquatic plants. Therefore, this species is also classified as omnivore.

A slightly flattened head and wide eyes indicate this species is making a sudden ambush on its prey. When hunting, the Giant Softshell Turtle will quickly pop its head from its shell while opening its mouth to catch live prey that can move such as fish.

This species is actually quite strong and ferocious: when feeling threatened, he can carry out a ‘biteless punch’ attack with his head.

The Giant Softshell Turtle reproduces by laying eggs three times a year. Like turtles in general, this species will also bury its eggs in an egg chamber in the sand, above the tide point of the river.

An egg chamber contains an average of 24 to 70 eggs, while the average egg incubation period is about 60 days.

However, not all of the eggs can hatch safely due to natural selection and egg poaching.

The morphology of the Giant Softshell Turtle clutch was not much different from that of the adult.

There are differences in the shell color, where the juveniles may have dark-spotted carapaces and heads, with yellowish white around the carapace.

According to the IUCN (International Union for Conservation of Nature), the Giant Softshell Turtle is classified as an Endangered (EN) species. 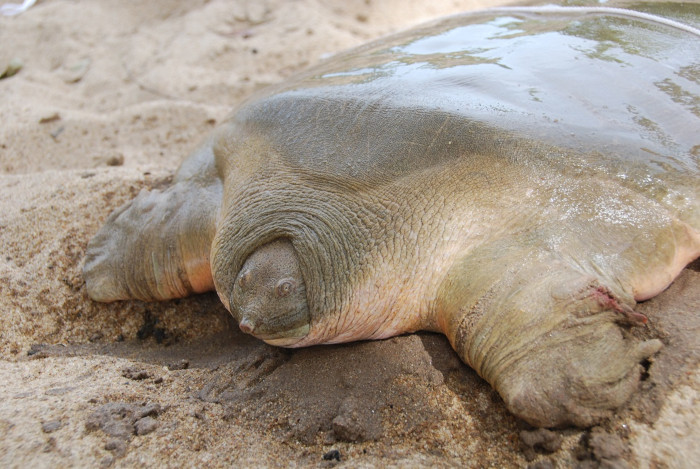 THE CONSERVATION STATUS OF GIANT SOFTSHELL TURTLE IS DUE TO ILLEGAL HUNTING ACTIVITIES THAT THREATENED THEIR EXISTENCE IN NATURE. Photo Credit: SUN YOEUNG

The population of Giant Softshell Turtle in the wild has decreased quite drastically due to the damage of their natural habitat and rampant poaching.

Moreover, Pelochelys cantorii is caught to be consumed by humans in almost every distribution area of this species.

Some of the catches are also happen because this turtles sometimes entrapped in fishing traps installed by local fishermen.

In the Kampar Peninsula, the RER team is focused and consistent in providing education to local communities on sustainable fishing methods, including protecting turtle species.