Meet the Changeable Hawk-Eagle (Nisaetus cirrhatus), a bird which belongs to the Accipitridae family.

Beside Indonesia, where it is known as Elang brontok, this bird is also native to the Indian subcontinent (Bangladesh, India, Nepal and Sri Lanka) and Southeast Asia (Brunei, Cambodia, Malaysia, Myanmar, the Philippines, Singapore, Thailand and Vietnam).

The Changeable Hawk-Eagle is one of the 304 species of birds which have been identified in the Restorasi Ekosistem Riau (RER) area, where it is observed to be a resident species, as well as a common one.

The bird gets its “changeable” name as some subspecies are dimorphic. The subspecies found in RER (Nisaetus cirrhatus limnaetus) generally has two morphs: a dark morph which has the bird fully covered in dark brown feathers as well as a light morph which is brown above with a pale underpart and visible streaking on the breast. Heads of young birds are usually whitish or buff, with a few dark streaks.

The Changeable Hawk-Eagle is considered to be a medium-large bird, measuring 60 to 72cm in length and weighing 1.2 to 1.9kg. The bird has long wings which are held flat while it is flying. Males are about 15 per cent smaller than females. 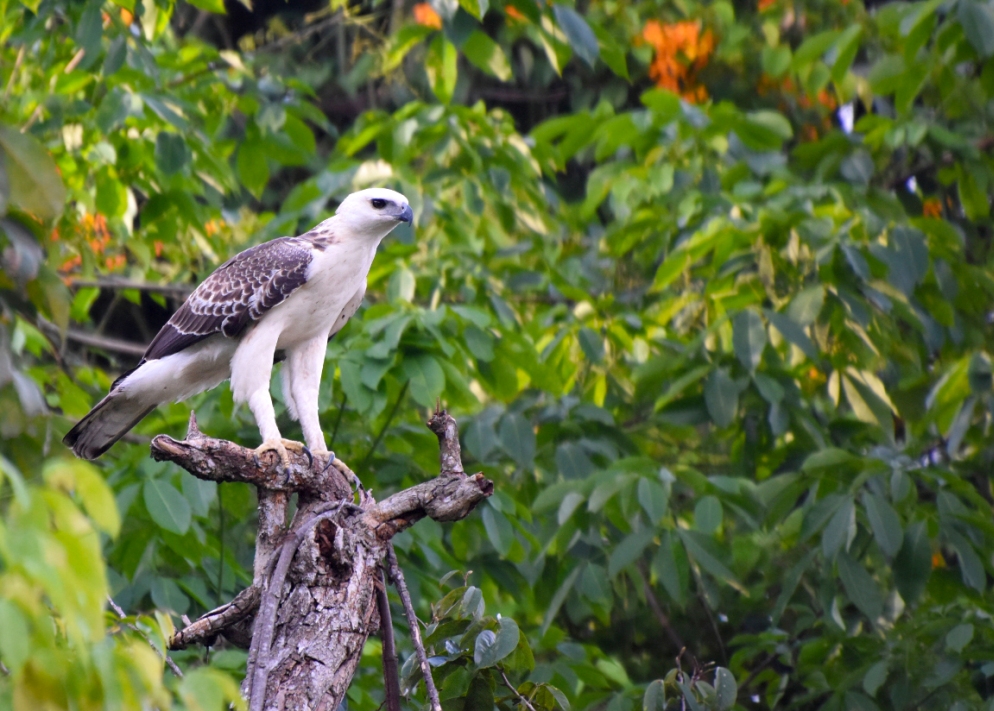 A Changeable Hawk-Eagle perches itself on a well positioned vantage point, scanning for potential prey. There are currently 24 species of raptors found across the Kampar Peninsula in Indonesia, which is home to our restoration area.

The Changeable Hawk-Eagle has a loud, high-pitched sounding call which begins short before rising in crescendo and ending as a scream. As with other eagles, it tends to be more vocal during the breeding season.

Outside of mating season, the Changeable Hawk-Eagle is often seen individually in open woodlands or cultivated lands with high tree density. It is a sedentary species, perching bolt upright on a bough among canopy foliage, waiting for prey to come out into the open.

It eats small mammals, birds and reptiles including squirrels, hares, rats, frogs, lizards, and pheasants. When it spots such prey, the bird will swoop down forcefully before striking and carrying the prey away in its talons. Interestingly this behaviour even extends to prey in the water, provided that it is close to the surface, making the Changeable Hawk-Eagle a formidable and versatile predator.

While this species does not breed every year, the nest which the pair builds can be used year after year and generally the pair often only has the one nest. Both adults will take part in repairing the nest, when needed.

This species lays a single greyish-white egg, which is either unmarked or have faint light-red specks. Only the female carries out incubation of the egg, during about 40 days. The young will fledge about 65 to 70 days after hatching.

The Changeable Hawk-Eagle holds a Least Concern (LC) conservation status issued by the International Union for Conservation of Nature (IUCN), meaning that it is an abundant species.

However, the Changeable Hawk-Eagle is a protected species under Indonesian law.

The Changeable Hawk-Eagle is one of the 299 species of birds included in a bird checklist which was published by the RER in 2017.