The Asian Openbill (Anastomus oscitans) is a medium-sized stork. It is commonly found in tropical southern Asia, from the India subcontinent to Southeast Asia.

This unique stork migrates in response to weather and food availability to specific destinations during breeding.

Asian Openbill was among 163 birds spotted by the Restorasi Ekosistem Riau (RER) team during the annual Asian Waterbird Census (AWC) 2021 in the Kampar Peninsula. 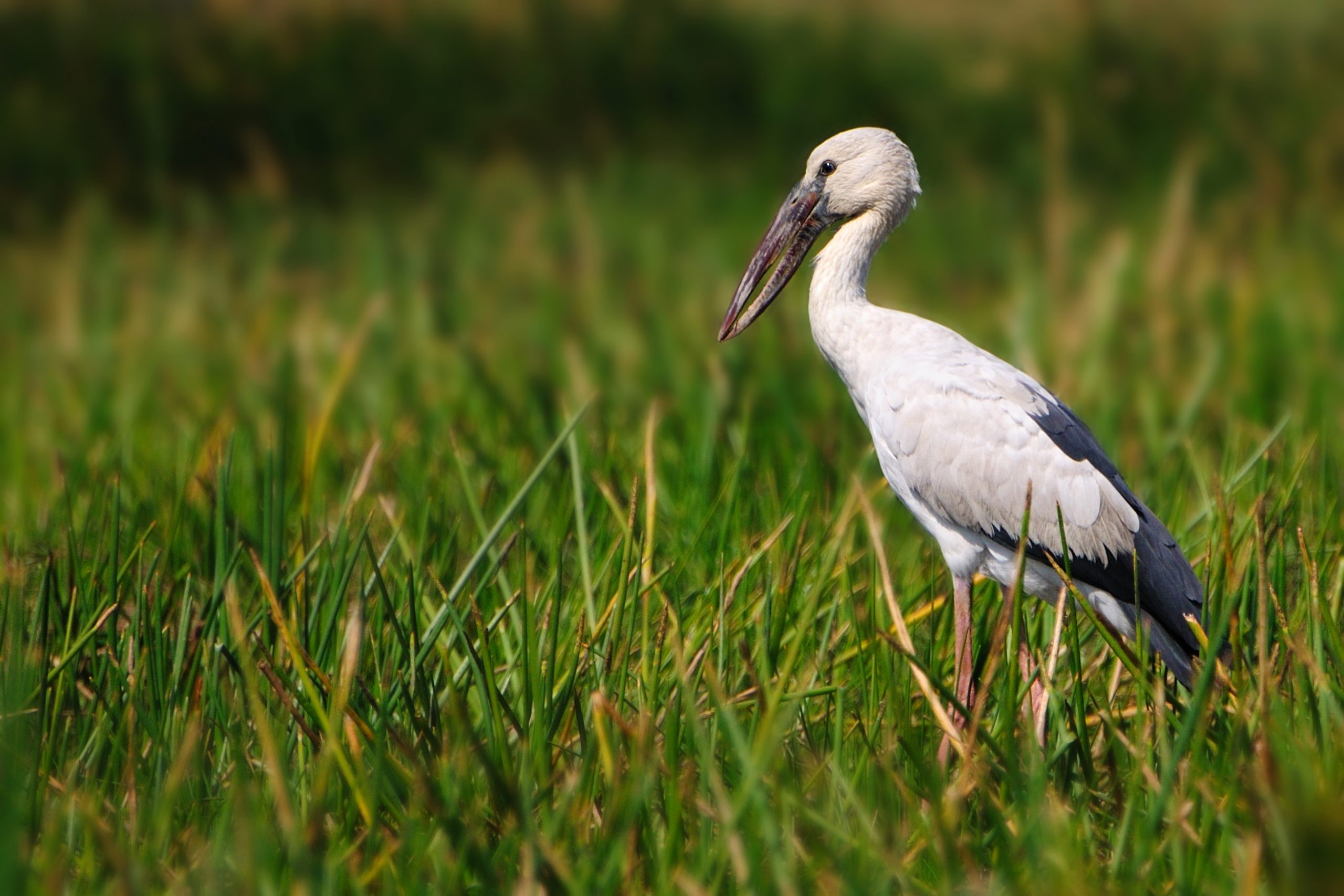 ASIAN OPENBILL WAS SIGHTED DURING THE ASIAN WATERBIRD CENSUS 2021 IN THE KAMPAR PENINSULA.

The birds are often seen on agricultural landscapes where they will preferentially use crop fields, seasonal marshes and irrigation canals as foraging habitats.

They prefer areas with plenty of rainfall, and usually build stick nests on tree branches that are around 4.5-5 meters above the ground.

Characteristics
They are categorized as medium-sized storks. Their average body length is around 68 to 81 cm, with a wingspan ranging from 147 to 149 cm. Storks typically weigh from 1.3 kg to 8.9 kg.

Asian Openbills have greyish or pale white plumage with a forked black tail, black wings and pinkish to grey legs.

A notable feature of this bird is their dull yellow-grey open bill with a specific gap formed between the lower and upper mandible of the beak in adult birds. The cutting edges of the mandible have a brush-like structure that is thought to give them a better grip on the shells of snails.

Asian openbills are often mistaken for herons and other stork species. Storks generally have a heavier build and fly with their neck outstretched.

Male and female Asian openbills are sexually monomorphic meaning that they are showing slight variation in morphology. The only way to distinguish them is by position during mating.

Young Asian Openbills can be distinguished from adults due to the brown traces in their plumage.

Behaviour
Asian Openbills are migratory and diurnal or active during the daytime rather than at night. They rely on moving between thermals of hot air for sustained flight.

They often form large nesting colonies in trees with other storks and waterbirds, such as herons, because they are highly social.

The storks are always close to their colonies with nests built in tall trees to protect their offspring from predators.

Like all storks in general, Asian Openbills’ vocalization is minimal due to the absence of syrinx muscles. Their calls are often described as mournful “hoo-hoo” and low grunting noises at very close distances.

Rather than calling, Asian Openbills resort to bill-clattering as the primary method of communications, especially during the breeding season.

Diet
As carnivores, their diet primarily consists of small aquatic invertebrates such as crabs, worms, frogs, fish and golden apple snails. However, lizards, large insects and snakes also make up a large part of their diet. 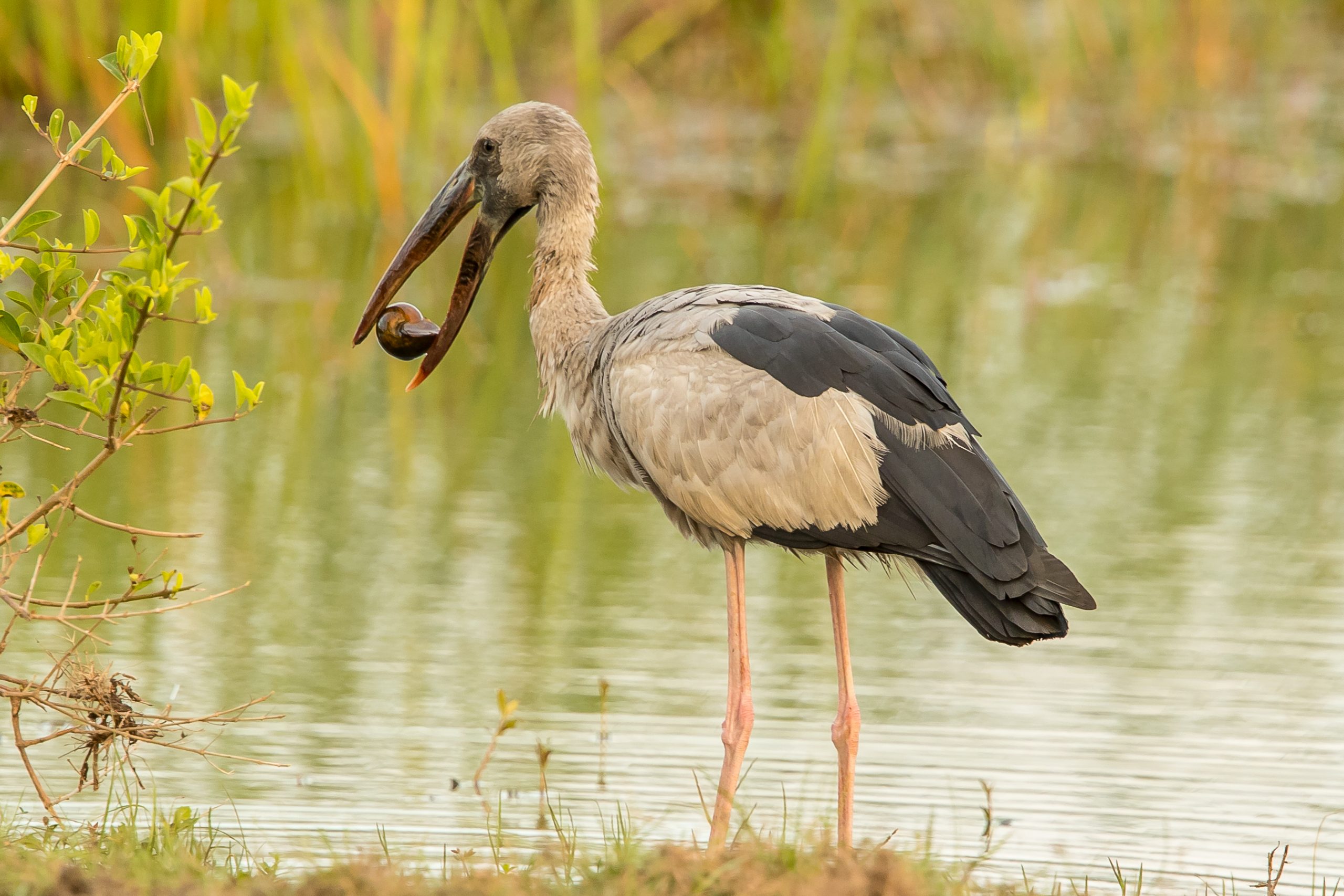 They may form flocks in areas saturated with food but typically feed alone. They will wade in the water and spot their prey, relying on sight and touch to perceive their environment.

Asian Openbills usually swallows their prey whole, but they may also use their sharp, pointed lower mandibles to crush hard-shelled prey like snails and extract their flesh.

Like most storks, they will walk slowly and steadily on the ground while feeding on their prey.

Ecosystem roles
One of the ways Asian Openbills contribute to the ecosystem health is through their droppings. It will turn as fertilizer for wetland plants and increase the plants, crab and fish populations.

That is why Asian Openbills serve as effective indicators of the ecological health of wetlands.

Although their conservation status is categorized as Least Concern (LC) in the IUCN Red List, hunting and poaching of this species is rampant as the meat and eggs are regarded as delicacies and sold at high prices.