The 13 Hornbills of Indonesia

Hornbills (Bucerotidae) are a family of bird originated from Africa, Asia and Melanesia, named after their massive, curved bills.
Globally, there are 62 species of hornbills living in a wide variety of landscapes, including savannas, forests, and even high-altitude rocky areas. Almost all hornbill species nest and spend their time in trees, but they sometimes also nest on rocky cliffs.

The 13 hornbills of Indonesia
There are 13 species of hornbills native to Indonesia. Sumatra has the highest number of hornbill species with nine residing across the island, followed by Kalimantan Island with eight species and Java with three species. Meanwhile, three are endemic to the Wallacea Region and Papua in Indonesia.

Helmeted hornbill(Rhinoplax vigil)
The only species adorned with a massive keratin casque at the upper part of its beak, this is the most threatened hornbill in Indonesia. In late 2015, IUCN moved this species from Near Threatened (NT) to Critically Endangered (CR), just one category away from Extinct.

Sulawesi hornbill (Rhabdotorrhinus exarhatus)
One of three species that is endemic to Indonesia, it’s smaller than other hornbill species. This species is listed as Vulnerable (VU) in the IUCN Red List.

Sumba hornbill (Rhyticeros everetti)
Another endemic species to Indonesia, which is only found in Sumba Island, it’s quite a large bird that lives in forest canopy. This species is listed in the IUCN Red List as Vulnerable (VU). 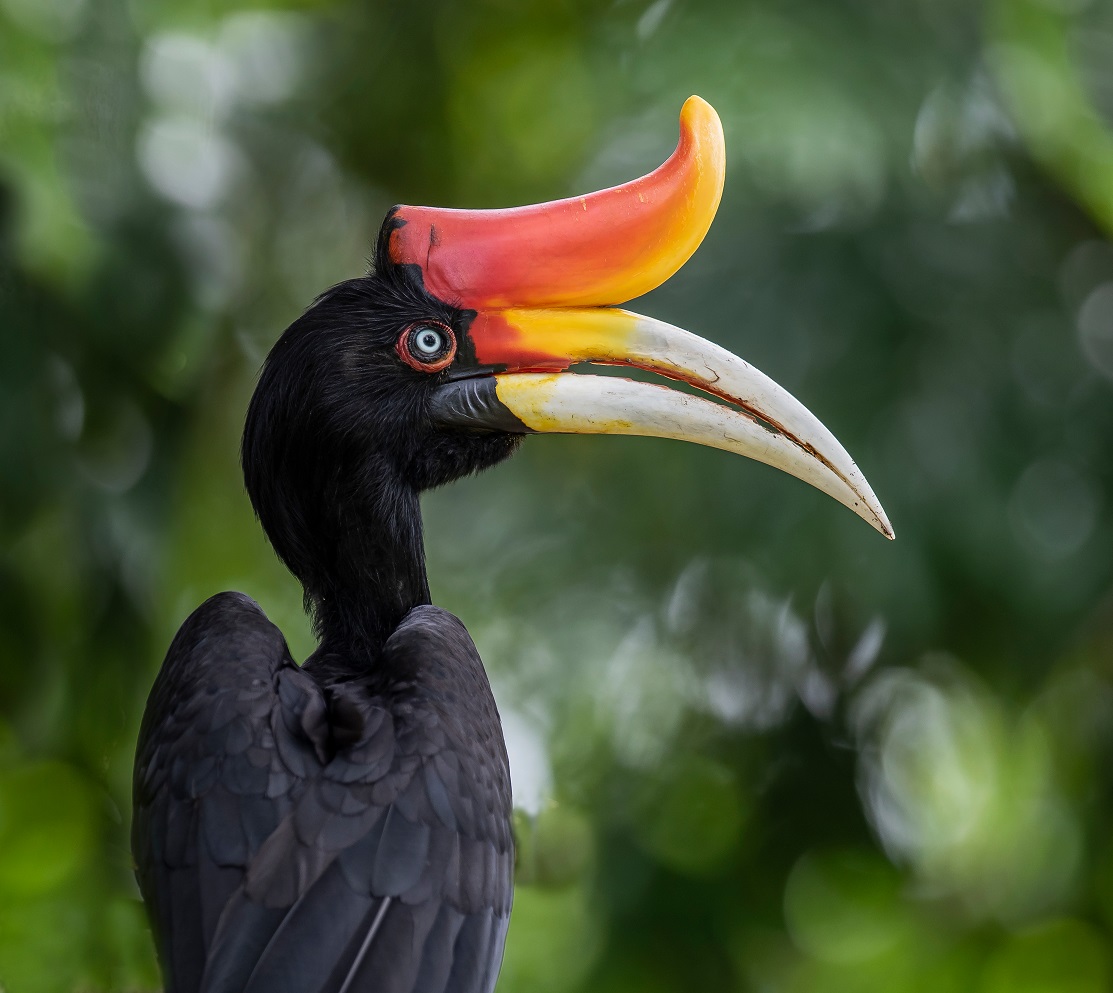 Rhinoceros hornbill (Buceros rhinoceros)
A large hornbill that usually forages in pairs. The pair will separate up to 300m apart while foraging for food, and communicate with various calls. This hornbill is listed as Vulnerable (VU) in the IUCN Red List.

White-crowned hornbill (Berenicornis comatus)
The only hornbill with a tufted crown. Usually lives in small groups of three to eight individuals to large groups up to 20 birds. It is classified as Endangered (EN) in IUCN Red List.

Wreathed hornbill (Rhyticeros undulatus)
This species loves to explore and requires vast undisturbed forest to be able to do so. The wreathed hornbill is listed in IUCN Red List as Vulnerable (VU).

Blyth’s hornbill (Rhyticeros plicatus)
Occurring in the easternmost regions of Indonesia, the species is popularly known by its local name: Kokomo. Since 2004, Blyth’s hornbill or Papuan hornbill has been listed as Least Concern (LC) in the IUCN Red List. 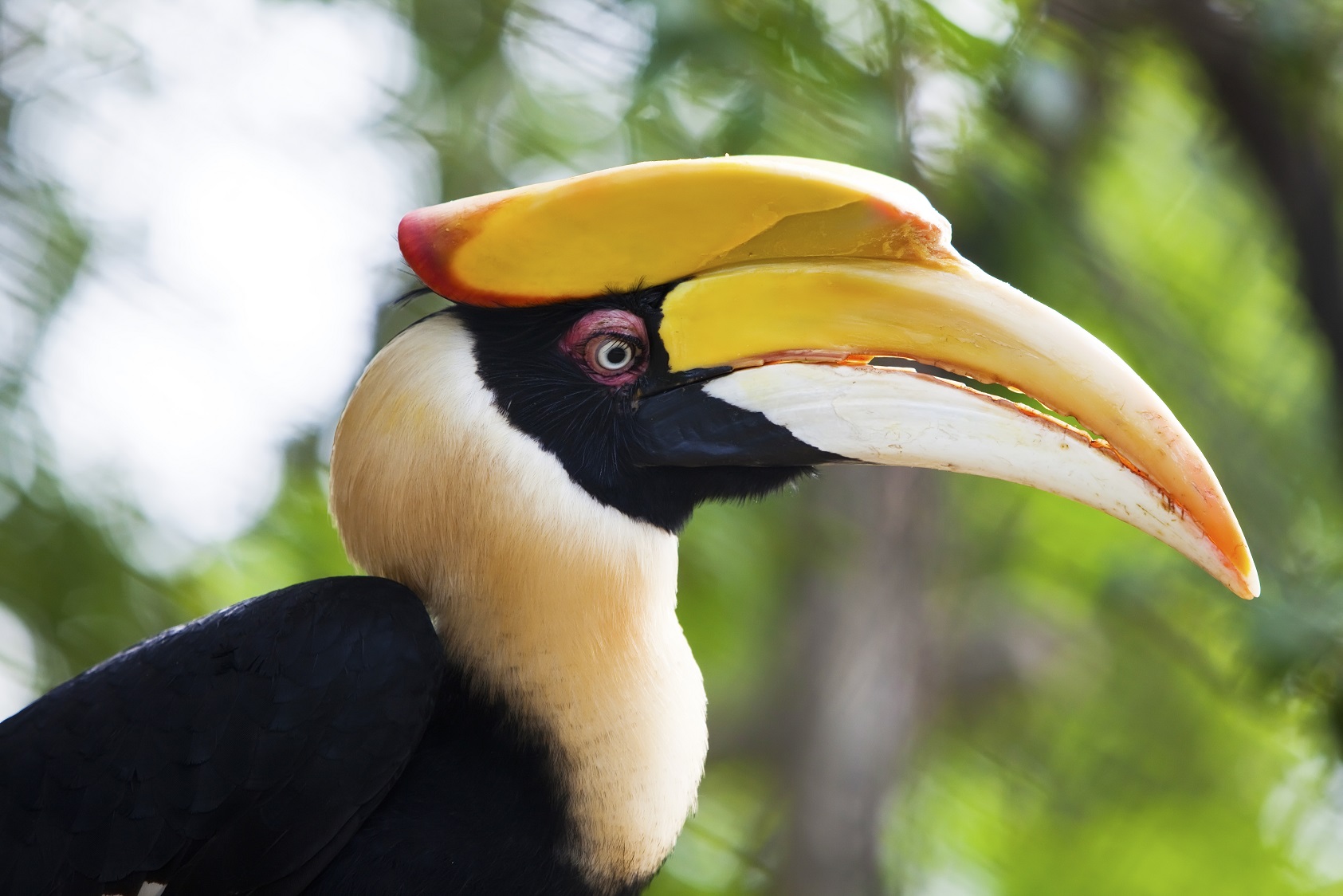 Great hornbill (Buceros bicornis)
A large hornbill species from Sumatra that is usually solitary in certain territory. The Great hornbill is listed as Vulnerable (VU) in the IUCN Red List.

Black hornbill (Anthracoceros malayanus)
This hornbill is known as a social species that is loyal to its mate. The black hornbill is listed as Vulnerable (VU) in the IUCN Red List.

Wrinkled hornbill (Rhabdotorrhinus corrugatus)
An active bird that is always on the move. Frequently found in lowland swamp forests less than 300m above sea level. The wrinkled hornbill is listed on the IUCN Red List as Endangered (EN).

Oriental pied hornbill (Anthracoceros albirostris)
This bird occurs over an extensive range that includes India, Bhutan, Nepal, Bangladesh, Myanmar, Vietnam, China, Cambodia, Malaysia, Singapore, Thailand and Indonesia. They have long eyelashes, which are actually modified feathers and protect their eyes from the sun. The Oriental pied hornbill is classified as Least Concern (LC) in the IUCN Red List. 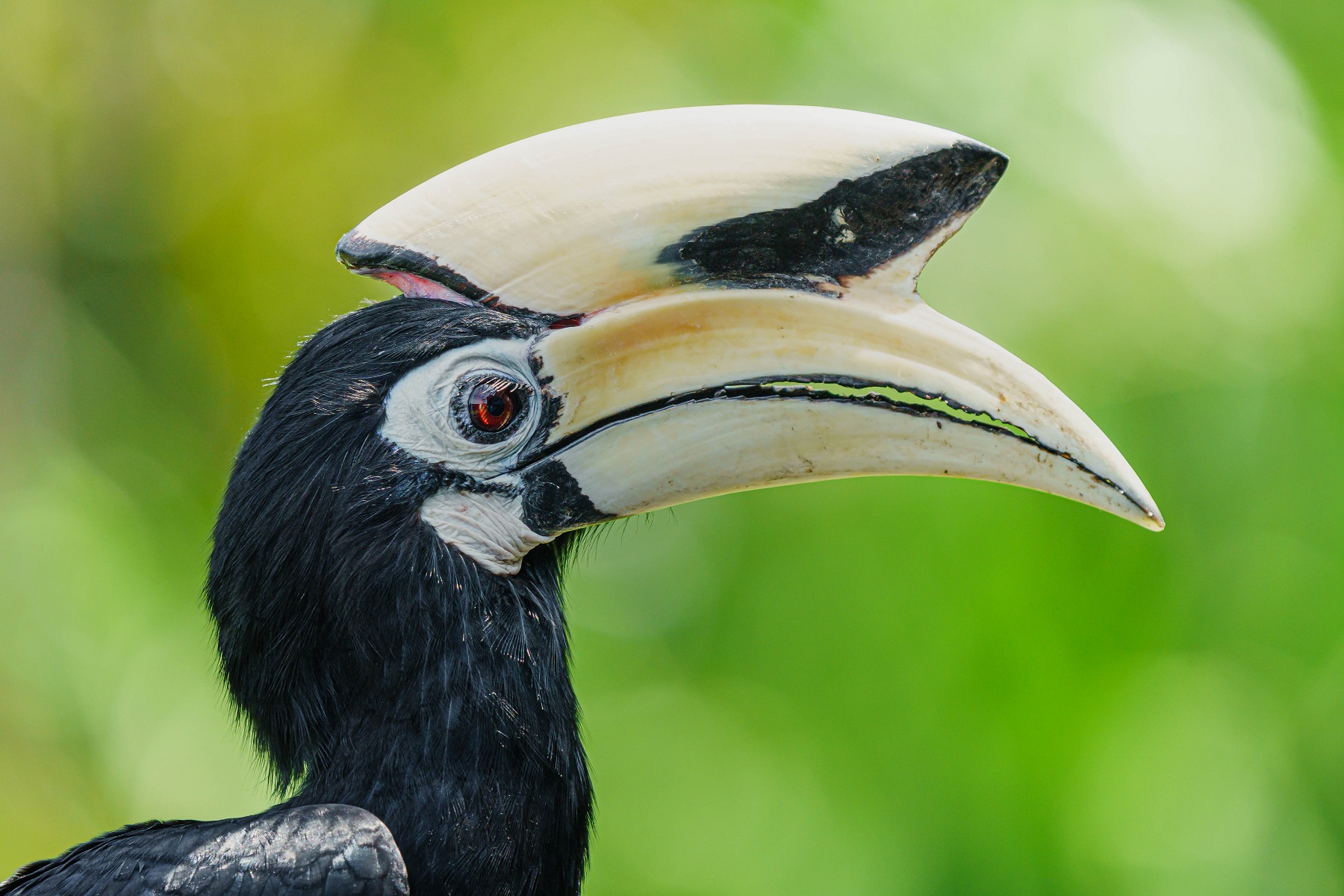 All 13 species of hornbills in Indonesia are protected under Indonesian Law, and a total of eight of a possible nine hornbill species found in Sumatra are known to be present in Restorasi Ekosistem Riau (RER) on the Kampar Peninsula, Sumatra.

General characteristics
Hornbills have relatively large bodies, although each species shows considerable variation in size. The smallest species is the black dwarf hornbill (Tockus hartlaubi) which weigh around 99.1 gram and measure 32 cm in length.

The largest species, the southern ground hornbill (Bucorvus cafer) has an average weight between 3.77 to 6.3 kg with a wingspan of about 180 cm. Males are always bigger than females.

Their bodies are almost covered by feathers of various colors: white, gray, black, or even yellow and red on their heads, necks, or around the eyes. Hornbills can also be identified from their calls and wing flaps.

Undoubtedly, hornbills are easily identified from their ostentatious beak, which is sometimes adorned with a casque. Casques vary in size and color, and can function in many ways, from a statement piece during mating session to resonating sound, make hornbills’ territorial calls more audible. Casques also provide support when the birds use their beaks to peel off tree bark or dig in soil for insects.

Unfortunately, hornbill species with casques are threatened by poachers. Casques are softer than ivory and easy to carve into jewelry or other decorative items.
Hornbills can carry the unusually large beak because they are the only birds in which the first and second neck vertebrae are fused together, along with their powerful neck muscles.

Diet and behavior
Hornbills eat fruit 99% of the time, but during the low fruit season they will also feed on insects, crabs, reptiles, small birds or small mammals.
There are several ways that hornbills obtain their food, such as digging, levering, chasing, plucking, hawking, and swooping. Before ingesting their food, hornbills will crush, soften, carry or swallow.

In the wild, hornbills depend entirely on forest conditions. All Asian hornbill species nest in broken-off trunks of a tree, a naturally formed tree hollows, or abandoned nests. During incubation, the male will seal the female in a cavity using its own dung mixed with soil or regurgitated food, leaving only a small slit as a door to deliver food. Protected from predators, the female will generally lay two eggs, which will incubate for about 42 days.

A week before the chick is ready to explore on its own, the female will tear the door down and leave the shelter. The chick rebuilds the protective wall and will stay inside by itself while the parents are foraging for food. The chick will fledge after 80 days.

Cultural and environmental role
Hornbills play an important role in the forest ecosystem; they disperse seeds from digested fruits and berries. They are also highly regarded in Indonesia’s culture, especially by the Dayak tribe, the indigenous people of the islands of Borneo or Kalimantan in Indonesia.

Members of the Dayak tribe use symbols inspired from almost every part of the bird’s body and use it in cultural ceremonies or as home décor. Dayak people believe that the hornbill symbolizes purity and strength, and that they are the guardians of life.

They even have customary laws built around a mythology that hornbills are their heroes or gods. For example, there is a belief that if you hear a Rhinoceros hornbill calling during a tribal conflict, you should follow it to lead you to a safe place.

Several provinces in Indonesia even adopt hornbills as symbols of the provincial pride. The Helmeted hornbill is West Kalimantan’s mascot while South Sulawesi adopted the Knobbed hornbill.

Get to Know More About Keystone Species in RER March 7, 2022 All species are important, but some are even more important than others. We refer to these as keystone species, and they are crucial to the wellbeing of the ecosystems they…
Wildlife of RER: The Great Hornbill April 18, 2018 Indonesia's peatland areas are some of the most sensitive and endangered ecosystems in the world and the Kampar Peninsula in Sumatra...
Back to Field Stories