The Common Greenshank (Tringa nebularia), which was last sighted in the area 16 years ago, was identified by the Restorasi Ekosistem Riau (RER) team during the Asian Waterbird Census (AWC) 2021 in the Kampar Peninsula.

AWC is a global activity that is conducted every year. In Indonesia, it’s coordinated by Wetlands International.

Usually conducted in the second and third week of January, AWC helps efforts to conserve waterbirds and wetlands by counting the numbers of the various species.

RER has been participating in this survey since 2017. This year, five RER ecology staff worked near the Kampar River from 19 to 21 January. 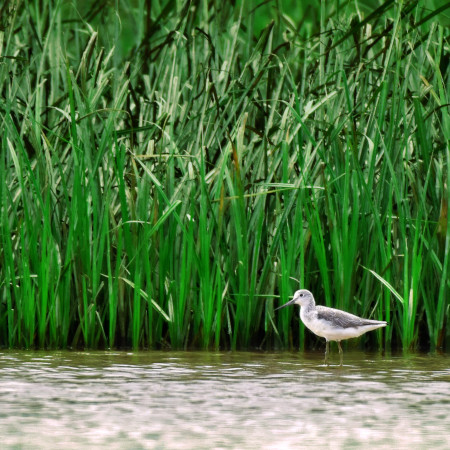 Common greenshank was sighted again after 16 years during the Asian Waterbird Census 2021 in the Kampar Peninsula.

This year the RER team found their presence in a habitat near the Kampar River – a very exciting discovery, since they were last spotted in the region in 2004.

These birds are known for their striped tails. With their greenish legs, this bird can move swiftly when they are feeding in the wetland.

This species has a body size of about 32cm. Its back and wings are flecked with dark grey while its chest, abdomen and lower tail are colored white.

The Greenshank will migrate to Indonesia and southeast Asia during when winter starts in northern Eurasia. This is the right moment if we want to meet them.

Even though it is considered as Least Concern (LC) by the IUCN, its hunting in the countries situated in their migratory corridor should be taken quite seriously.

On the first day of observation, the most frequently sighted bird was the Purple Heron Cangak Merah (Ardea purpurea) with a total of 112.

The RER team also found other Tringa birds, such as the Common Sandpiper (Actitis hypoleucos), during the two days of observation.

Another interesting finding was the Lesser Adjutant (Leptoptilos javanicus) which is categorised as Vulnerable in the IUCN Red List of Threatened Species. 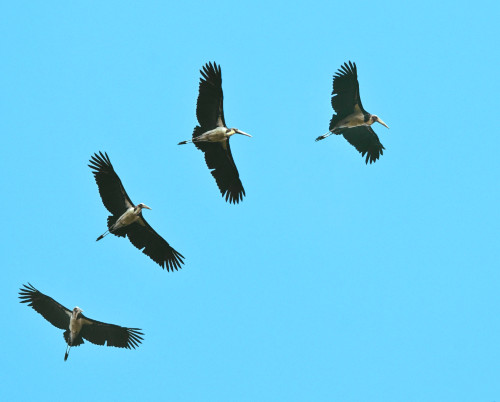 Lesser Adjutant, a protected bird species in Indonesia and included as Vulnerable in the IUCN Red List

This species can reach up to 110-120 cm tall with wingspan of around 210 cm and weight of 5kg. It’s distinctive because it runs before flying, like an aircraft accelerating down the runway.

Spotting the Lesser Adjutant in this year’s AWC has definitely boosted the team’s spirit!

Under this reason, RER plans to continue its participation in the following AWCs.

See you next year!

(Bahasa Indonesia) Perbedaan Burung Kakaktua dan Beo October 14, 2022
Popular in East Kalimantan, Intermediate Egret Appears in RER’s AWC 2022 March 31, 2022 Ardea intermedia was the second most sighted bird species by the Restorasi Ekosistem Riau (RER) team during the Asian Waterbird Census (AWC) 2022.
Get to Know More About Keystone Species in RER March 7, 2022 All species are important, but some are even more important than others. We refer to these as keystone species, and they are crucial to the wellbeing of the ecosystems they…
Back to Media Centre