PULAU PADANG – Monitoring wild animals in their natural habitat is not easy. That’s especially true in a dense and sometimes remote environment such as RER. The Sumatran Tiger for example is a rare animal with a large territory, so a direct encounter with a human is extremely unusual.

To get around this problem we use camera traps: hidden cameras which only start recording video or taking photos when movement is detected nearby.

Camera traps play an important role in this process, enabling a far larger area to be monitored.

Camera traps are not set at random. For them to be effective initial research needs to be conducted on the species that exist in an area, estimations of population size and the state of their habitats.

“Often wildlife can detect our presence far before we detect them,” said Prayitno, a member of RER’s Ecological Restoration Team, while delivering training for camera trap installation to the RER Field Team at Pulau Padang in May 2017.

“Camera traps offer an opportunity for us to observe the secretive lives of wildlife.” Much of the footage, while useful, tends to be repetitive: the same species or individuals doing largely the same thing. But occasionally the camera traps capture something unexpected.

“We may from time to time be presented with an interesting behavior, very rarely observed in conventional survey methods. For example, a picture and video of a Crested Serpent-eagle diving on a snake is one unique moment we captured,” said Prayitno.

Other animals to be caught on camera include Sun Bears and the Sunda Clouded Leopard.

After the initial training, two camera traps were installed within the RER concession in Pulau Padang, with 10 more cameras to follow in the next few months.

The most important factor in installing camera traps is to identify locations that are frequently targeted by wildlife, such as trails and places where they search for food and water. Therefore, it is also necessary to identify signs or marks that show the presence of the target species to determine the best location for camera trap installation.

Information from locals who may have encountered the wildlife in the past is also an important reference. The RER team for example has been informed of pangolins, mouse deer, porcupine, wild pig, deer, sun bears, and many reptiles and birds, which provides useful intelligence on locations.

At the RER concession in Pulau Padang, the camera traps are set on the possible trails of small mammals, such as pangolin and cats. Camera traps are usually mounted on a pole or tree about two meters away from the wildlife trails to capture the best images. 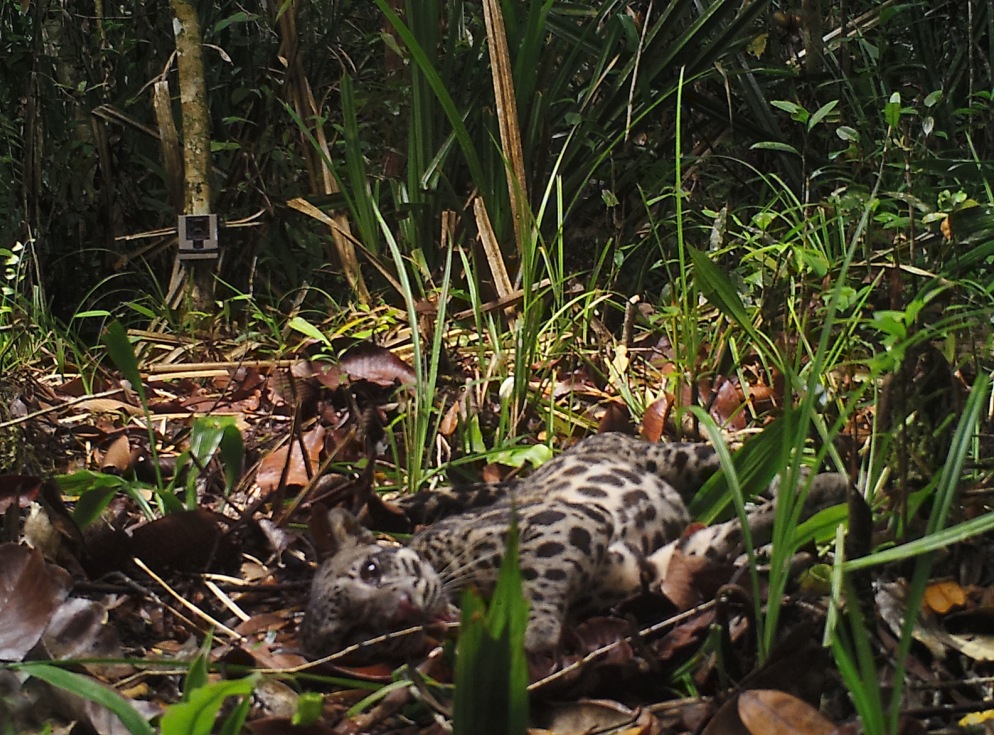 The Sunda clouded leopard is the largest cat in Borneo, listed as Vulnerable on the IUCN Red List. The total population is estimated at fewer than 10,000 individuals and continues to decline. But lucky us, we found this one safe in our conservation

The height of the camera trap is adjusted based on both the contour of the land and the size of the species to be observed: a small mammal might see the camera just 10-20cm above ground level, while for bigger animals it will be placed higher.

The footage can be exciting, but it serves a more serious purpose too. Knowledge of the wildlife population and its behavior is vital in our restoration efforts and provides us with valuable information to refine our management approach.

RER has published a biodiversity inventory of the RER concession area in Kampar Peninsula, a report from a survey conducted by one of RER’s partners, Fauna & Flora International (FFI). The full report can be downloaded here.