Meet the Sunda Flying Lemur (Galeopterus variegatus) , the only mammal belonging to the family Cynocephalidae recorded in the Restorasi Ekosistem Riau (RER).

Despite the name, this species is not a lemur nor it can’t actually fly: it’s one of the most skilled gliding mammals in the world, able to glide for up to 100m.

This species is classified as a colugo, of which there are just two known species in the world. The Sunda Flying Lemur’s slightly larger cousin, the Philippine Flying Lemur (Cynocephalus Volans), is found exclusively in the Philippines.

Sunda Flying Lemur is native to the forests of Southeast Asia, throughout Indonesia, Malaysia, Thailand, and Singapore. 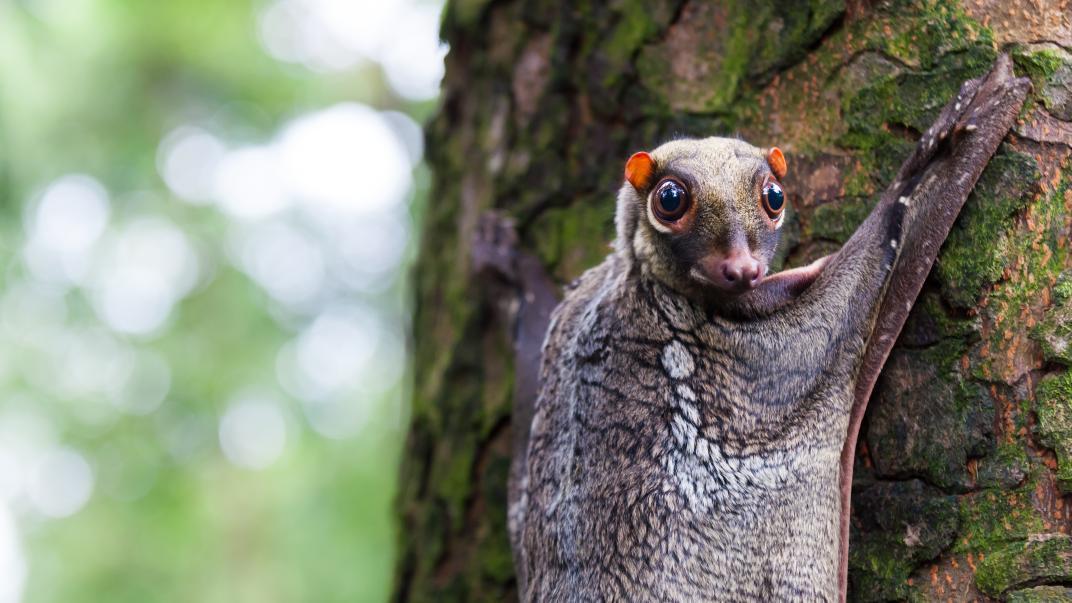 They have small heads with wide brows, blunt snouts, large eyes, and small ears. They have four legs of similar size with webbed feet and curled claws.

The lemur is covered in dense and mottled fur with a pale underside while the shades of the dorsal fur can be grey, white, red, or black. They blend in with their surrounding quite well, with bold patches of colour that look like lichen on a tree.

The reason why they can glide smoothly is because of a fully furred membrane of skin called a patagium, which extends along the limbs from the neck to the fingers, toes, and nails.

Their patagium can extend up to 70 cm during gliding, giving it a large surface area to keep itself aloft.

According to the Walker’s Mammals of the World encyclopaedia, a Sunda Flying Lemur was once recorded gliding over 136m in distance.

It has 34 carnivore-like teeth, with unique comb-shaped bottom incisor teeth that are not only good for feeding, but also help to comb parasites out of their fur and pelts when they’re grooming. 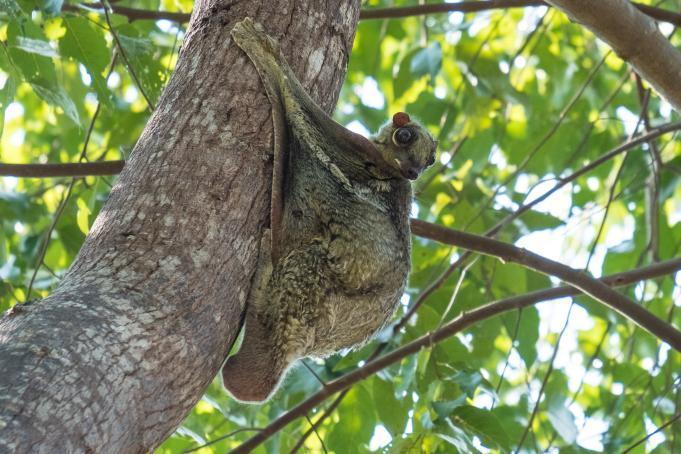 Behaviour and Diet
Sunda Flying Lemurs are mainly nocturnal, and will sleep in holes in trees or high in the dense canopy during the day. When climbing trees, they will stretch out the two front legs and bring up the two hind legs in a hopping gesture.

Their climbing skills are also helpful for defence as they will climb higher into the tree or freeze when threatened.

Sunda Flying Lemurs live alone or in small yet loosely connected groups. However, they tend to be territorial in term of home range and foraging areas.

The mammal is strictly herbivorous, feeding on soft plant parts such as flowers, fruits, young leaves, buds, nectar, and sap. The unique ‘toothcomb’ is used to scrape up sap from trees or to strain fruits and flowers.

Ecosystem roles
As herbivores which mainly consume fruits and flowers, Sunda Flying Lemurs are important for seed dispersal as well as flower pollination.

Unfortunately, they are occasionally hunted for their skin and meat and considered as pests for fruit crops because they adapt well to disturbed and fragmented forests and plantations.

Although the species’ conservation status is categorised as Least Concern (LC) in the IUCN Red List, their population is reported to be decreasing due to habitat loss.

Sunda Flying Lemurs are protected under the Indonesian law and hunting the species is considered illegal.

Insect Identification in RER November 10, 2021 RER held insect identification training for its field team from September 8 to 12, 2021, in collaboration with the Department of Biology at the University of Riau to properly identify…
Wildlife of RER: Large Flying Fox October 22, 2021
Why We Love and Appreciate Squirrels in RER September 10, 2021
Back to Field Stories