The cat is native to Borneo and Sumatra in Indonesia, where it known by its Indonesian name Macan Dahan. It is also native to Sabah and Sarawak in Malaysia, and Brunei Darussalam. 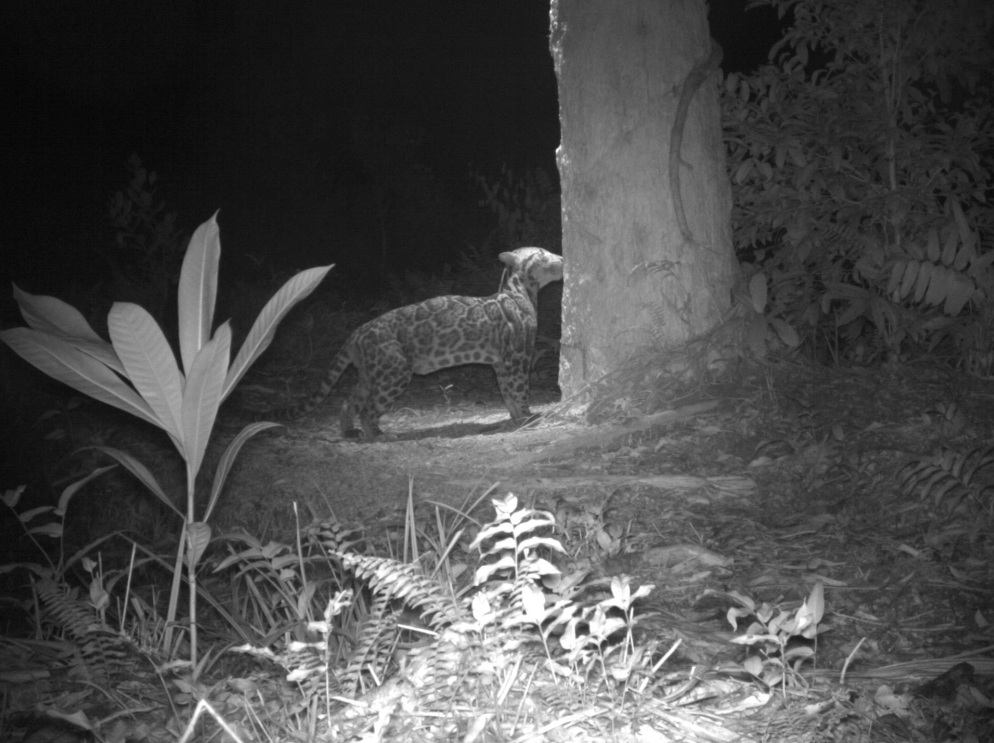 The Sunda Clouded Leopard holds a Vulnerable (VU) conservation status issued by the International Union for Conservation of nature (IUCN). It is one of the 17 globally-threatened mammal species identified in RER.

The IUCN estimates that only about 4,000 individual Sunda Clouded Leopard are left in the world. However, within Indonesia, this leopard is six times more abundant on Borneo than on Sumatra.

The Reason behind this is there are other predators in Sumatra, such as tigers and dholes (Asian dog), which out compete the clouded leopard. Based on field observations, clouded leopards are almost absent in areas with an abundance of tigers.

Population loss of the Sunda Clouded Leopard has been attributed largely to deforestation through illegal logging, encroachment, as well as possible hunting of the species.

The Sunda Clouded Leopard is a protected species in all three countries it is found.

Within RER, several images of the Sunda Clouded Leopard have been captured by the team’s camera traps. Male and female pairs, and juvenile leopards, have been photographed. Clouded leopardsseem to outnumber tigers in the Kampar Peninsula.

The Sunda Clouded Leopard is the largest cat in Borneo (it is beaten in size by the Sumatran Tiger in Sumatra). However, it is considered to be a medium-sized cat, with a length ranging from 55cm to 91cm), and weight of 12kg to 30kg. Male leopards are often larger than the females.

This leopard has relatively shorter legs and an elongated body which makes it look like a civet. It also has an exceptionally long tail, which aids the animal in term of balance.

These, along with the leopard’s broad paws, are suited to the animal’s forest-dependent and arboreal (tree-living) lifestyle.

Among cats, the Sunda Clouded Leopard has the largest canine teeth compared to the average size of the skull. It was previously speculated that this leopard is a descent of the famous sabre-toothed cat.

Its coat is marked wth irregularly-shaped ovals, said to be shaped like clouds (giving the animal its name). These spots are darker than its primary coat colour, which is ussualy greyish brown to yellowish brown. The spots are also outlined in black. This species also has two distinguishing black bars on the back of its neck.

The Sunda Clouded Leopard is unable to roar or growl, but it is still able to take down larger, more formidable prey such as juvenile wild boars. It also risks snatching sub-adult pig-tailed monkey, whose troops have the capability of lynching the cat in return.

The Sunda Clouded Leopard matures sexually around two years of age. It has a gestation period of about three months, which can result in a litter of one to five cubs.

As it is rather than secretive animal, little else is known about the habits of the Sunda Clouded Leopard. However, it has been noted that this leopard tends to hunt mainly on the ground, using its climbing skills as a way to avert danger.