Meet the Flat-headed Cat (Prionailurus planiceps). Like all cats, it belongs to the Felidae family.

Native to Indonesia, Malaysia, Brunei and previously Thailand, the Flat-headed cat is described as one of the least-known and highly threatened cat species in the world, with fewer than 2,500 mature individuals in the wild. It has been listed as an Endangered (EN) species by the International Union for Conservation of Nature (IUCN) since 2008.

It is one of the only 13 globally-threatened species with an EN status which have been identified in the Restorasi Ekosistem Riau (RER) area.

The Flat-headed Cat is one of the only six cat species found in Sumatra. In the last quarter of 2019, the RER team managed to record four individual Flat-headed Cats across three of its four concession areas, conforming that the species is present and distributed relatively broadly across the RER area. 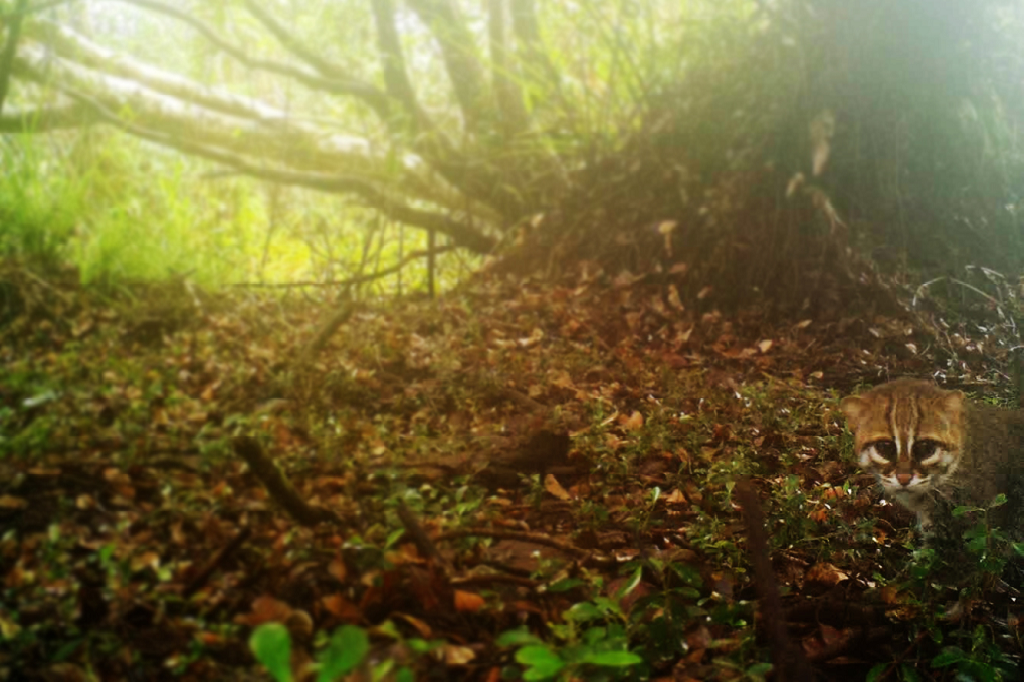 This cat tends to favour wetlands and lowland tropical forests, near bodies of water where it spends a lot of time in (unlike most other small cats).  All 11 records of this species by RER have been in proximity to water bodies in our concession areas, either near river systems or old drainage canals containing water. This cat will also visit ponds that form after floods subside to catch fishes trapped there.

It is unique among cats in that it is one of the only four cats which is unable to retract its claws. This is similar to the Fishing Cat species, suggesting that these claws are adapted for living in slippery wetlands. The Flat-headed Cat is easily distinguished by the extreme depression of its skull, which extends along its nose to its muzzle. The distance between its eyes and rounded ears is comparatively great. The cat’s ears are rounded and small, which  might also be an adaptation for aquatic lifestyle.

This cat’s face is lighter in colour compared to its body, with a white chin and muzzle. It also has two prominent whitish streaks in between its eyes that run down either side of the nose.

Its fur is reddish-brown on top of its head, dark brown on the body, and spotted white on its underbelly.

It has relatively powerful jaws and unusually long canines for catching and retaining slippery aquatic prey in water. It is a carnivore with a diet that is almost completely made up of fish, though it also hunts for frogs and crustaceans.

The Flat-headed Cat also differs from other cats in that it has partly webbed toes that aids in its preference for hunting in water. This cat has also been likened to racoons in that it will seemingly wash its food in water before consuming it.

This cat is seemingly solitary and territorial, engaging in scent marking by leaving a trail of urine on the ground.

When it does reproduce, it has a gestation period of about two months. Flat-headed cats in captivity have been observed to have litters of one to four kittens.

The Flat-headed Cat is included in the CITES Appendix I list. It is fully protected by national legislation, with hunting and trade of this species prohibited in Indonesia, Malaysia and Thailand.

Although it is predominantly threatened by habitat loss due to forest destruction or degradation, it also faces some threat by humans in the form of trapping, snaring and poisoning.