Indonesians called this species Musang Belang. Belang means stripes due to several white and dark bands along its back. Its scientific name comes from the Greek word Hemi that means ‘half’ and gale that means ‘weasel’ because of of how they look. 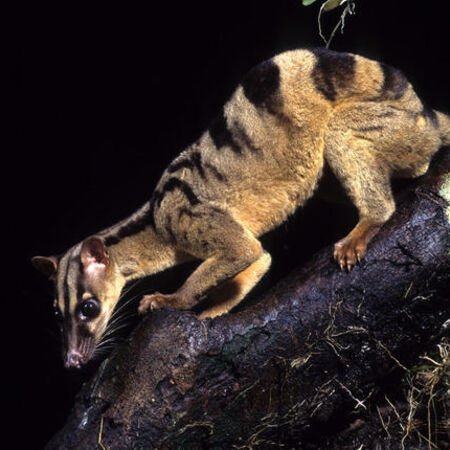 During our last biodiversity survey of the mammal species of the Kampar Peninsula, the team identified the Banded Civet as being relatively abundant in the RER forest.

The Banded Palm Civet is a carnivore, eating everything from rodents, small reptiles and insects, to ants and crustaceans. Even though their diet is based on meat, they can sometimes also be found eating plants and fruits. Their retractable claws and powerful feet allow them to be good climbers, and long tapered snouts assist in their feeding habits.

The Civet is a nocturnal animal and partly arboreal. They usually forage on the forest floor during the night and sleep in their nests in holes or in trees during the day. They are also known to hunt for prey in trees and near streams or watery ecosystems.

They are solitary animals who are also territorial, marking their territorry using scent. They are secretive and can be ferocious, hissing, spitting, and even attacking when faced with an invader.

The Banded Civet is about the size of a domestic cat with a long and slender body. They can measure up to 53cm, not including their tail, and weigh from 1-3 kg. 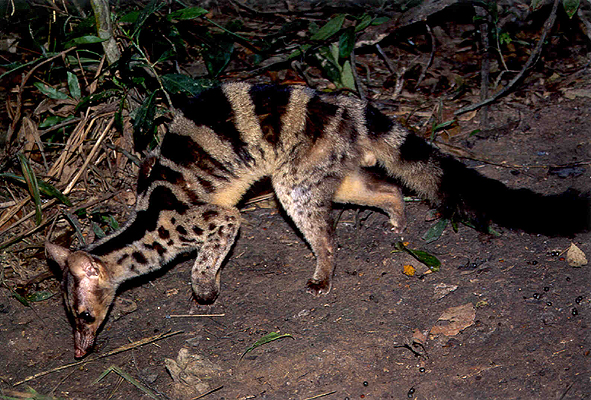 Due to their secretive behaviour and low reproduction success in captivity, little information is available regarding their mating habits.

From the few banded civets observed in captivity, they usually give birth to one or two litters, which weigh about 125 grams. These litters usually open their eyes after 8 to 12 days and nurse for about 70 days before eating solid food.

In general, viverrids have two litters per year, one in the spring and one in the fall. The gestation period ranges from 32 to 64 days among all of the species of this family.

Very little is known regarding the lifespan of the Banded Civet in the wild.

The Banded Palm Civet is listed under Appendix II of CITES (the Convention on International Trade in Endangered Species of Wild Fauna and Flora). Even though they are not necessarily threatened with extinction, its trade must be controlled. In the IUCN Red List of Threatened Species they are also listed as Near Threatened (NT).

In the wild, the Banded Palm Civet’s main threat is habitat loss and deforestation which makes it hard for them to find food, as well as access to trees and place to hide from predators. Hunting is also a threat because of the growing interest in them as pets.

RER has been working to protect these fascinating animals because they are essential in our efforts to restore and conserve more than 150,000 hectares of ecologically important peat swamp forest in the Kampar Peninsula and Padang Island in Riau Province, Sumatra.