Meet the Malayan Tapir (Tapirus indicus). There are four species of tapirs in the world, but this is the only one found in Asia, specifically on the island of Sumatra in Indonesia, Myanmar, Malayan Peninsula and Thailand.

The Malayan or Malay Tapir is the largest tapir species, weighing up to 350 kg and measuring 1.8 meters long. It’s one of the 76 mammal species identified by the Restorasi Ekosistem Riau team on the Kampar Peninsula. 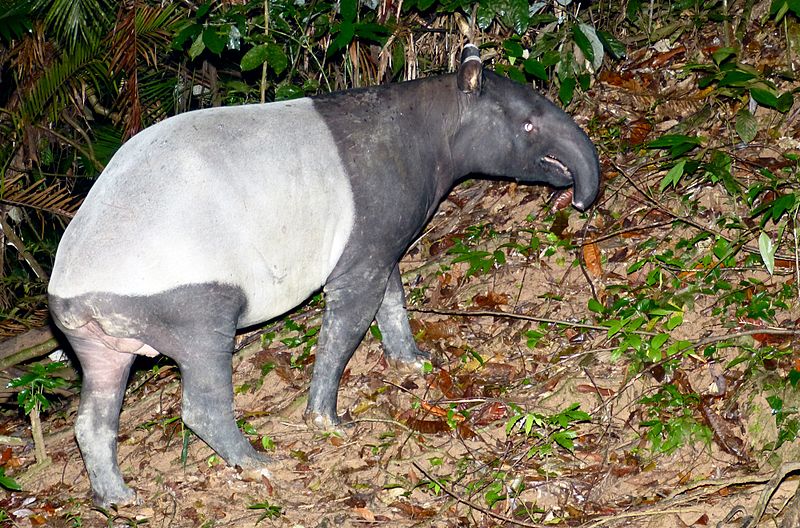 The Malay tapir is the largest tapir species, weighing up to 350 kg and measuring 1.8 meters long. SOURCE: HTTPS://EN.WIKIPEDIA.ORG/WIKI/MALAYAN_TAPIR

Malay tapirs are easily recognizable by their colours. An adult has a black head and hind quarter and a large white patch around their belly.

This pattern serves as camouflage to make predators mistake it for a large rock instead of prey, especially when it’s lying down to sleep.

Young tapirs of all species have brown hair with white stripes and spots to enable them to hide effectively in the shadowy light of the forest. The pattern will fade into adult coloration in four to seven months.

The females are usually larger than the males. The tapir has a small, stubby tailsand a long, flexible proboscis. It has four toes on each front foot and three toes on each back foot.

The Malay Tapir has rather poor eyesight, so it always counts on its excellent hearing and sense of smell.

As a solitary creature, the Malay tapir marks out large tracts of land as its territory by spraying urine on plants.

It’s a herbivore, and will forage for leaves as it moves slowly while leaving the scents behind for other tapirs to note. The mammals communicate with each other by making squeaks and whistles of different pitch and duration.

However, it can run quickly through thick vegetation when threatened, and if it needs to defend itself it will attack with its strong jaws and sharp teeth.

Tapirs are a crepuscular animal, which means they are active primarily during the twilight period. They tend to eat soon after sunset or before sunrise and nap in the middle of the night.

Although Malay Tapirs can live up to 30 years, their populations continue to decline, mainly due to severe hunting for illegal trade and habitat loss. 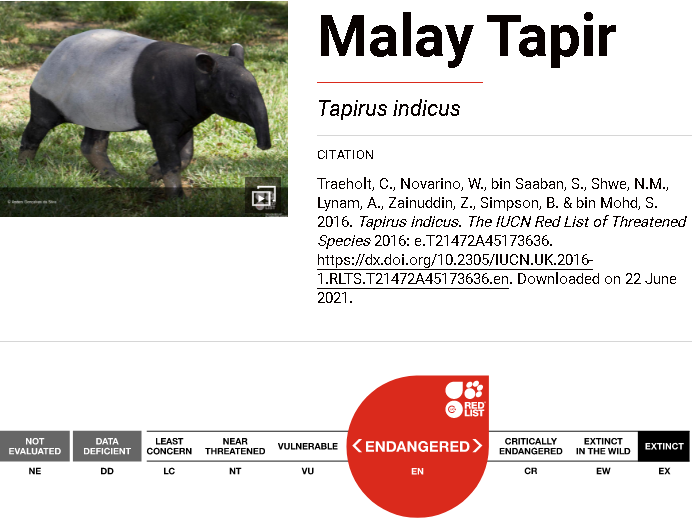 It is increasingly difficult for them to recover since tapirs do not reproduce rapidly.

They have to undergo a period of 13 to 14 months of gestation to produce a baby, and the newborn will need to take up to 18 months of attachment period to its mother before being able to live independently.

Due to these conditions, Malay Tapir has been listed as Endangered (EN) in the IUCN Red List.